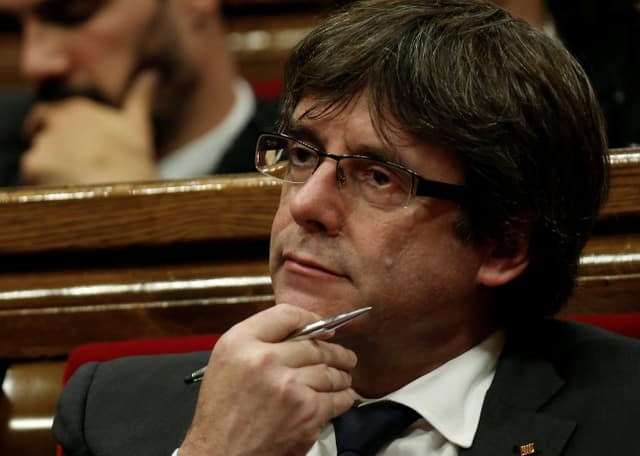 Catalonia‘s leader Carles Puigdemont on Thursday said he would not hold a new regional election to break the deadlock between Madrid and separatists wanting to split from Spain, sharpening a political crisis that could spill into direct confrontation.

Puigdemont had been expected to announce an election to head off moves by Madrid to take direct control of the autonomous region in the next few days.

But, speaking in the courtyard of the regional government headquarters in Barcelona, Puigdemont said the central government had not provided sufficient guarantees that holding an election would prevent the imposition of direct rule.

“I was ready to call an election if guarantees were given. There is no guarantee that justifies calling an election today,” Puigdemont said.

He said it was now up to the Catalan parliament to move forward with a mandate to break from Spain following an independence referendum that took place on Oct. 1 – a vote which Madrid had declared illegal and tried to stop.

Puigdemont’s stand sets the stage for the Spanish Senate on Friday to approve the take-over ofCatalonia‘s institutions and police, and give the government in Madrid the power to remove the Catalan president.

But this could spark confrontation on the streets as some independence supporters have promised to mount a campaign of civil disobedience.

Spanish Deputy Prime Minister Soraya Saenz de Santamaria, speaking in a Senate committee, said: “The independence leaders have shown their true face – they have promised a dream but are performing tricks.”

The aim of Article 155 — the constitutional trigger for direct rule — was to permit any election to take place in a normal and neutral situation, she said. The Spanish government has said it would call such a vote within six months of taking over Catalonia.

The political crisis, the gravest since Spain’s return to democracy four decades ago, has dividedCatalonia itself and caused deep resentment in other parts of the country.

It has also prompted a flight of business from the wealthy region and worried other European leaders who see it as fanning separatist sentiment elsewhere on the continent.

It was not clear whether Prime Minister Mariano Rajoy would immediately enforce direct rule or simply seek the Senate’s authorisation to do so without making it effective on the ground.

Exactly how the central government would enforce it in practical terms, and how Catalan civil service and regional police would react, is also uncertain.

National police used heavy-handed tactics to try to prevent the Oct. 1 referendum from taking place, drawing accusations that they were resorting to the repressive behaviour of the 1939-1975 Franco dictatorship.

Spain’s IBEX closed up 1.9 percent as hopes of a breakthrough in the crisis fuelled optimism among investors. Catalonia contributes a fifth of Spain’s economy, the fourth-largest in the euro zone.

However, in a fast-moving battle of wills that has seen both sides stake out hard positions and try to keep each other guessing, it was not impossible that a sudden breakthrough could be made in the next 24 hours.

According to Spanish media, Puigdemont is ready to call an election if the government drops Article 155, releases two senior secessionist leaders who are in jail and removes national police from Catalonia.

Even if the Senate voted for direct rule on Friday, Puigdemont would not be stripped of his powers until Saturday when the law is published in Spain’s official state gazette.

Ander Gil Garcia, a spokesman for the Socialist group in the Senate, said: “We are in the last hours of the penultimate day in which we can avoid what nobody wants.”

He appealed to Puigdemont to call a regional election “and avoid a disaster from whichCatalonia and Spain would take a long time to recover.”

A regional election could either strengthen Puigdemont’s mandate if pro-independence parties won or allow him a graceful exit if they did not.

Earlier on Thursday, when it was thought Puigdemont would announce an election, he was denounced by some angry independence supporters as a traitor.

Several hundred gathered outside the regional government headquarters in protest. Some pro-secession lawmakers and mayors announced they would step down.

Albert Ribas, a 37-year-old hotel director listening to a radio in Barcelona’s Sant Jaume Square, said it had been a hard day.

“We have lost our dignity. But I suppose we had to show the outside world that were still making the effort to talk to the Spanish government. But again we see we have hit a wall.”

Xavier Font, a 65-year-old pensioner with a Catalan flag around his neck, said: “Let’s just declare independence now. The people have voted ‘yes’ and we are tired of so many turns.”