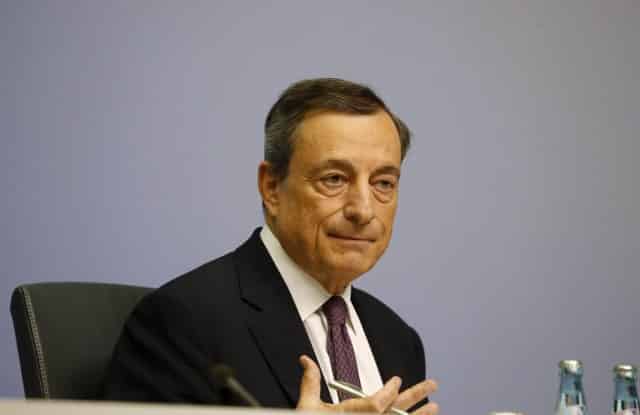 The European Central Bank on Thursday took its biggest step yet in weaning the eurozone economy off years of stimulus but said the economic outlook was still dependent on its lavish monthly purchases of euro zone bonds.

It said it will cut the amount of bonds it will buy each month from January, but hedged its bets by extending the lifespan of the bond-buying programme to the end of next September.

ECB President Mario Draghi called the changes a “recalibration” and indicated that the bank’s work in boosting inflation and ensuring growth was not yet done.

The bank will cut its bond buys in half to €30 billion a month from January, taking comfort in an economic recovery now in its fifth year and moving in sync with peers like the US Federal Reserve and the Bank of England, as they also prepare to tighten policy.

But bothered by stubbornly low inflation, the ECB twinned the cut with a nine month extension of the programme, opting to buy fewer bonds but for a longer period to reassure investors it will provide accommodation for a long time.

Indeed, the ECB even maintained its option to increase or extend the bond buying programme, an apparent victory for policy doves who argued that they should not commit to ending the buys since possible euro gains could exacerbate weak inflation.

Euro zone bond yields fell after the announcement on what traders said was relief over the programme’s continuation, albeit it with less buying.

At a news conference, Draghi said that the eurozone economic outlook had improved but that core inflation had not yet shown any convincing signs of an upwards trend — the goal of much of the stimulus.

“Domestic price pressures are still muted overall and the economic outlook and the path of inflation remain conditional on continued support from monetary policy,” he said. “Therefore, an ample degree of monetary stimulus remains necessary.”

Designed nearly three years ago to fight off the threat of deflation, the bond purchase scheme has cut funding costs, revived borrowing and lifted growth, even if it ultimately failed to raise inflation back to the ECB’s target of almost 2 per cent.

“If the outlook becomes less favourable, or if financial conditions become inconsistent with further progress towards a sustained adjustment in the path of inflation, the Governing Council stands ready to increase the asset purchase programme in terms of size and/or duration,” the ECB said in a statement.

Interest rates were left unchanged as expected and the ECB reaffirmed its guidance to keep them unchanged until well after its bond buys end.

Draghi told the news conference that there had been some difference of views among the rate-setters but that decisions were taken in a positive attitude.

Hawks such as Germany and the Netherlands have wanted a commitment to end bond buys, arguing that growth is now above trend and that more purchases do next to nothing for inflation.

Doves on the bloc’s periphery, however, warn that a rapid exit could tighten financial conditions, undoing years of work.

The broader outlook is as good as it has been since before the global financial crisis. An unbroken growth streak has created seven million jobs and the expansion is now self-sustaining, driven by domestic consumption.

Banks are better capitalised, lending is growing, and divergence between the core and the periphery, the biggest failure of the currency project, appears to have halted.

Inflation, however, is expected to miss the ECB’s target of almost 2 per cent at least through the decade as labour market slack remains large, keeping a lid on wages and supporting the case for continued support.

The ECB is also slowly running out of bonds to buy in some countries, suggesting that market constraints will play an increasingly large role in the policy debate as a major redesign of rules risked sending the wrong signal when the bank is working on an exit strategy.

While a nine-month extension at a reduced pace is seen as viable under current rules, another extension could require more creativity as the ECB would be running low on German bonds to buy, a hurdle since purchase need to match the so called capital key, each country’s relative size in the euro zone.

Draghi indicated this was not a major concern at the bank.

“Our programme is flexible enough,” he said.