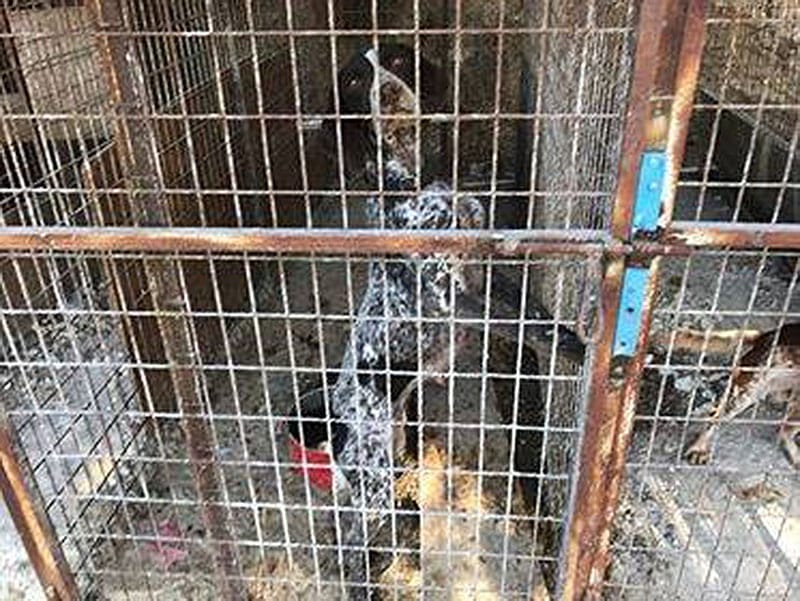 The dogs were kept in terrible conditions

Police said on Thursday they were investigating a man who allegedly kept his dogs in wretched conditions and denied claims that they acted one-sidedly following the arrest of a 26-year-old female volunteer who had reportedly rescued the animals.

The man had reported them stolen.

The 26-year-old woman was arrested on Wednesday after a Paphos resident reported that someone had stolen between Monday and Tuesday afternoon 10 hunting dogs from two metal cages that were in a village in the same district. According to the owner the dogs were worth €5,000 in total.

The woman was charged and released. She is to go to court at a later date.

The dogs in question were the ones that were rescued earlier in the week by animal welfare activists who were alerted by tourists who found them in an area of Kili, in Paphos, being kept in squalid conditions. Dead dogs and animal remains were also found there.

Cyprus Animal Defenders – Calf, posted on their Facebook profile a number of harrowing photos of the site. The group said that this was what sightseeing tourists came across on the outskirts of Paphos when they heard crying dogs.

The activists had announced that they would first rescue the dogs before alerting authorities, and invited people who could help to take in some of them.

Following the arrest of the woman, the Green Party criticised the police for “their one-sided stance”.

Police, the party said, arrested and charged the woman for theft, despite the fact that her intention was to rescue the dogs, but they seem reluctant to investigate the horrific conditions the dogs were living in.

It also said that the owner of the dogs did not register the animals with the vet services, therefore, “on what evidence was the police intervention made as it was solely on the basis of his claim?”.

“We believe that the police should look with equal commitment into the abuse that these dogs have suffered, but also whether the hunter was licensed to breed dogs and if he adhered to the restrictions imposed by the law on hunting dogs,” the party said.

They also called on the veterinary services and the Game and Fauna service to look into this case in relation with the legal framework governing their own field of work.

In response, police said that they acted based on the law and by taking into consideration the facts of each case. “Police reject claims of one-sided stance,” it said in an announcement.

The woman, police said, was arrested following the report of the owner of the dogs for theft.

“At the same time, a case is being investigated according to the law on animal protection and welfare,” police said.

The case is being investigated in cooperation with the vet services of the Paphos municipality, police said.