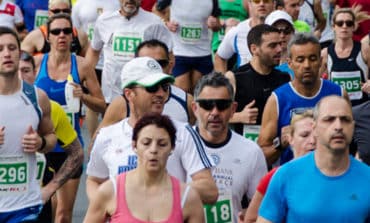 Around 3,000 to 4,000 people are expected to take part in the Larnaca International Marathon on November 19, the organisers told the Cyprus Mail on Thursday.

The race, officially known as the 1st Radisson Blu International Marathon of Larnaca, is organised by the Larnaca municipality, with mayor Andreas Vyras saying it promotes the city to “an athletics centre of global reach and esteem”.

At a news conference, Vyras said that in addition to exercise and health, the event promotes support and co-operation with organised groups offering public-good work, like the Karaiskakion Foundation, the Hope for Children organisation, the Movember movement and the Cyprus Special Olympics.

According to Sotiris Mavros, athletics director of the Marathon, the race includes a marathon (42.195 metres), a half-marathon (21.095 metres), 10- and 5-kilometre races, as well as the McDonald’s Kids Race (1 km) and the 1-km Fun Race for adults.

The marathon race will start at the Finikoudes beach, toward Makenzie beach and the Larnaca airport, and return to the starting point twice.

In a statement, the Larnaca municipality urged volunteers to step forward and help out.

“In every sporting event organized in Larnaca, volunteers are the backbone and the soul of such events,” the municipality said.

“The goal of the 1st Radisson Blu Larnaca International Marathon being a success requires a large number of volunteers, aged at least 14. Those interested in volunteering may contact Yianna Nicolaou on 99817979, Myria Neocleous on 97742294, or visit the Larnaca municipality website http://www.larnaka.org.cy.”

The organisers have told the Mail that they expect 3,000 to 4,000 individuals to participate in the race.

“As a city, Larnaca has not seen the kind of growth other cities have seen – for example, Limassol,” a spokesperson said.

“We thought this would be a good way to promote the city, especially since the racing movement has been sweeping Europe.”

A similar event organized on an annual basis by the Limassol municipality has seen wild success, boasting in its latest version last March – the 11th annual Limassol marathon – “more than 13,000 participants”.

As to the reasons why the popularity of such events is seeing unprecedented growth, the organisers said the reasons probably lie with a desire to escape technology and the urban lifestyle.

“So we thought we would organize a marathon – an event that, in addition to the above, obviously also satisfies the need for making exercise fun,” the spokesperson said.

The event is held under the auspices of the ministries of Justice, Education, Transport, Commerce, and Health, as well as the offices of the commissioner of volunteerism and the environment, the Cyprus police, civil defence, the Cyprus youth organization and the Cyprus Sports Organisation.

More information is available at http://www.larnakamarathon.com