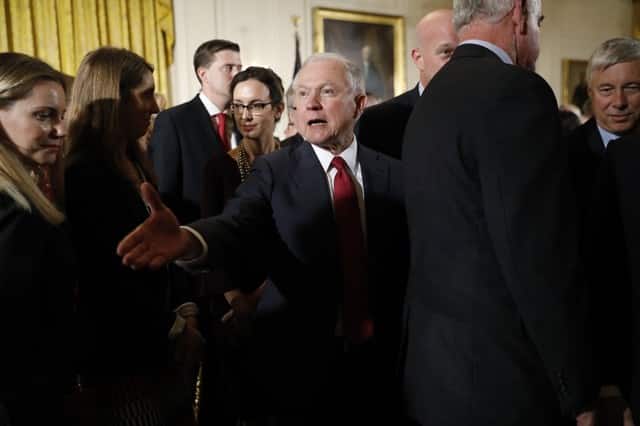 US Attorney General Jeff Sessions equated the opioid epidemic to a personal failing by many Americans who cannot “say no” to drugs on Thursday, and he said that marijuana could be serving as a gateway to the problem.

“People should say no to drug use. They have got to protect themselves first,” he said during a question-and-answer session at the Heritage Foundation think tank in Washington.

Sessions made his comments ahead of President Donald Trump‘s declaration that the opioid crisis a public health emergency, a move that will redirect federal resources to help combat the problem.

Sessions said he was extremely troubled by the epidemic, saying it has led to more overdose deaths than the height of the Aids public health crisis in the 1980s.

According to the US Centres for Disease Control and Prevention, opioids were responsible for more than 33,000 US deaths in 2015.

The Justice Department has stepped up enforcement efforts to combat the problem.

Earlier on Thursday, the Justice Department announced it had secured an indictment against a Pittsburgh-based doctor for unlawfully distributing opioids, in the first case of its kind to be brought since Sessions launched an Opioid Abuse and Detection unit.

But in response to a question about how best to combat the epidemic, Sessions cast the problem in a moral light.

“I do think that this whole country needs to not be so lackadaisical about drugs,” he said.

In urging people to say no to drugs, his comments channeled former First Lady Nancy Reagan, who famously launched a “Just Say No” anti-drug campaign when the crack cocaine epidemic was ravaging communities in the 1980s.

Her husband, President Ronald Reagan, during his tenure signed into law a sweeping criminal justice bill that established mandatory minimum sentences for drug offenses, including marijuana.

Sessions said on Thursday that “fentanyl people are really killers,” but did not clarify to whom he was specifically referring. He also said that he has heard from many police chiefs that drug addiction “starts with marijuana.”

Fentanyl is a synthetic opiate that is up to 50 times more lethal than heroin.

Michael Correia, the government relations director for the National Cannabis Industry Association, said Sessions is ill-informed and pointed to data showing many of the overdoses involve prescription painkillers.

According to the CDC, nearly half of all the opioid overdose deaths in the United States in 2015 involved prescription medications.

Greece welcomes Turkish proposal to sit down and discuss Cyprus

‘Bloodhound’ car kicks off bid to speed into record books