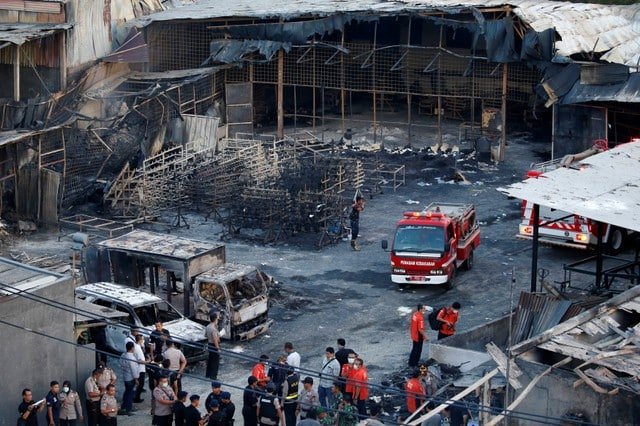 Fire fighters and policemen as seen inside an explosion at a fireworks factory at Kosambi village in Tangerang, Indonesia Banten province

Indonesian police on Friday started questioning the owner of a fireworks factory destroyed in a series of explosions and a fire that killed 47 workers and injured dozens, leaving some with horrific burns covering up to 80 per cent of their bodies.

In one of Indonesia‘s worst industrial disasters, many workers were unable to escape the fire at the plant in Tangerang, an industrial and manufacturing hub near Jakarta, on Thursday.

Police and residents broke holes in the walls to help trapped workers forced back by the intense heat from the blaze.

On Friday, a pile of sacks was still smouldering as forensics experts searched for human remains. The disaster will throw a new focus on safety standards at workplaces in Indonesia, where rules are often poorly enforced.

Police said the owner of the fireworks company, PT Panca Buana Cahaya Sukses, had returned to Indonesia to be questioned, along with seven witnesses, mostly administrative staff at the factory.

“When he heard about the incident at the factory he was in Malaysia and he flew back straight away and went straight to Tangerang Police,” Jakarta police spokesman Argo Juwono told Metro TV.

Earlier, Tangerang police chief Harry Kurniawan told Reuters the cause of the fire was still being investigated and denied reports that the factory gates were locked.

Responding to a report that underage workers were employed at the plant, Kurniawan said investigations had not shown this to be the case. Hospital records seen by Reuters showed two of the injured were aged 15 and 16.

Tangerang General Hospital is treating 12 patients, some for burns over 40 per cent to 80 per cent of their bodies, said a spokesman, Yudi Firmansyah.

“We are expecting treatment to take a long time,” Firmansyah added. “First there’s the life-saving stage, then further treatment to prevent infections, and cosmetic procedures.”

Ayani, who goes by one name, wept when she saw her severely burnt daughter, Nuhayati, 35, lying on a hospital bed.

“Her skin has been burned off completely,” she said, pointing to her forearms, torso and legs, and adding that her daughter had started working at the plant a month ago.

“She only had some hair on her head, but her skin is almost gone.”

Officials have warned that the death toll could rise, with police saying three people were still unaccounted for.

There were some narrow escapes at the factory, staffed mainly by young women paid about $3 a day.

Fitri, 18, told Kompas media she survived by submerging herself in a large tub of water used to clean equipment, along with four workers.

“If we stay here, we won’t be safe,” she eventually told her friends, before climbing a 3-metre (10-ft) wall beside the tub and breaking through the roof. Then residents used a ladder to help her descend.

The report said the fire was thought to have started in a holding area next to the front gate where fireworks were stored.

Victims in orange body bags were taken to a police hospital in East Jakarta for identification by families.

Sugeng Priyanto, an official at the Ministry of Manpower, told Metro TV a team was investigating safety standards at the warehouse, which had been operating for a few months.

Tangerang Regent Ahmed Zaki said the company had a permit to pack and wrap fireworks, though not produce them at the warehouse, which was close to a school and housing. Earlier he had said it had a manufacturing permit.

“Regulations may be in place officially, but too often are simply ignored, resulting in high levels of complacency,” it said.

All we need to know about babies