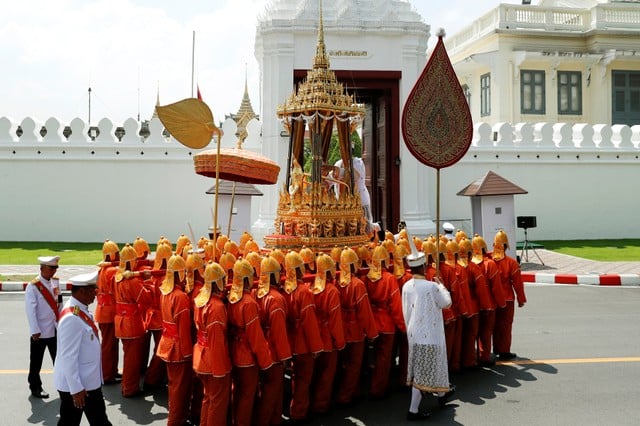 The ashes and bones of Thailand‘s King Bhumibol Adulyadej were returned to the palace on Friday as part of an elaborate, five-day cremation ceremony that drew hundreds of thousands of black-clad mourners to Bangkok’s historic old quarter.

King Bhumibol was the world’s longest-reigning monarch when he died a year ago aged 88. His seven-decade rule spanned some of the most tumultuous moments in modern Thai history, including several coups, a deadly crackdown on student protesters, natural disasters and a regional financial crisis.

His son, new King Maha Vajiralongkorn, presided over the burning of his father’s remains in a golden crematorium at a late-night ceremony in the Thai capital on Thursday.

Many mourners stayed to watch as smoke rose from the crematorium. Some broke down in tears.

The crowds had diminished on Friday, but thousands of people still lined the streets to glimpse what they could of a ceremony that in total cost $90 million.

“I can’t express my sadness at the loss. It’s like a child longing for a parent,” said Boonpherm Buatho, 56, a housekeeper.

Shielded from the sun by a large white-and-gold umbrella, King Vajiralongkorn led a religious ceremony to return his father’s remains to the palace. He sprinkled the bones with sacred water as classical Thai music played.

The remains were blessed by Thailand‘s Supreme Patriarch, the head of the order of Buddhist monks. The late king’s bones will be taken to the Grand Palace, where he had lain in state since his death last October.

Although Thailand does not conduct polls on the monarchy’s popularity – partly because of strict laws that protect the royal family from insult – the king built up a wide personal following and is often referred to as “father”.

The ceremony on Thursday brought Thailand to a standstill as many businesses, including banks, shut to honour the late king.

The late king’s nine-spired crematorium, built to honour the ninth king of the Chakri Dynasty, features intricate carvings and staircases with sculptures of nagas – a half-human, half- cobra beings – among other mythical creatures.

Pictures of mourners wearing black and holding photographs of the late king flooded social media in Thailand, with many using popular hashtags such as #rama9, #kingofkings, and #thegreatestking.

On Saturday, a religious ceremony for the late king’s remains will take place within the palace.

On Sunday, the bones will be transferred to the palace hall where the relics of past kings are kept. A procession will then take his ashes from the palace to be divided between the temples of Wat Rajabopidh and Wat Bovoranives.

The first of those temples contains the ashes of many royals. The second is where King Bhumibol was ordained as a monk – a tradition for many Thai men – and is the centre of the strict Thammayut sect founded by the late king’s great grandfather.

Trump releases some JFK files, blocks others under pressure