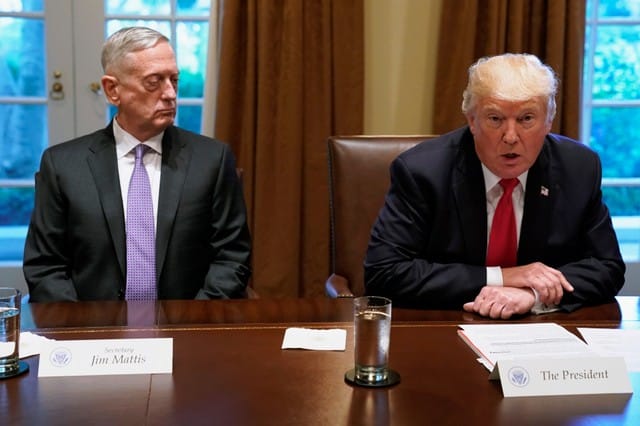 US Defense Secretary Jim Mattis emphasised diplomatic efforts instead of military ones to resolve the crisis with North Korea as he stood at the tense and heavily-fortified border between North and South on Friday, saying: “Our goal is not war.”

His remarks came before US President Donald Trump – who has threatened to destroy the North, if necessary – leaves on his first trip to Asia next week. His tour will include a stop in South Korea to meet President Moon Jae-in.

Moon, after talks with Mattis, said the “aggressive deployment” of US strategic assets on the Korean peninsula had been effective in deterring the threat from North Korea.

Separately, North Korea said it will release on Friday a South Korean fishing boat that was found to be in North Korean waters illegally, state media said, as the US defence secretary visited the border dividing the Korean peninsula.

Tension between North Korea and the United States has been building after a series of weapons tests by Pyongyang and bellicose verbal exchanges between Trump and North Korean leader Kim Jong Un, stoking fears any miscalculation could lead to an armed confrontation.

“As Secretary of State Tillerson has made clear, our goal is not war, but rather the complete, verifiable, and irreversible denuclearisation of the Korean peninsula.”

Standing alongside Mattis, South Korean Defence Minister Song Young-moo said: “We together will continue to defend peace through strong will and strong might.”

The proposed return of the South Korean fishing boat and its crew would avoid potentially worsening already strained relations between Pyongyang and South Korea and its US ally.

The South Korean fishing boat was seized on Oct 21 and investigation by the North found the boat and crew entered North Korean waters for fishing, state news agency KCNA reported.

North Korea decided to release the boat after “taking into account the fact that all the crewmen honestly admitted their offence, repeatedly apologising and asking for leniency,” the report said in English.

The vessel and its crew would be released in waters at the military boundary between the two Koreas, which are still technically at war after their 1950-53 conflict ended in a truce, not a peace treaty.

North Korean fishing boats have at times been found drifting south of the maritime border between the two Koreas, often having run out of fuel or broken down. Most North Korean crew are released to the North after interrogations by intelligence officials if they wish to return. It is more unusual for South Korean fishing vessels to be found in similar circumstances.

A South Korean Unification Ministry official said it was aware the fishing boat had gone missing earlier in the week. The crew of 10, including seven South Koreans and three Vietnamese, would be questioned by officials on their return, he added.

Ahead of Trump’s visit to Asia, Mattis has emphasised diplomatic efforts to find a peaceful solution to the current crisis during his week-long trip to the region.

“That’s really what it was all about – to keep the (North Korea) effort firmly in the diplomatic lane for resolution,” Mattis said earlier this week after three days of meetings with Asian defence chiefs in the Philippines.

Last week, CIA chief Mike Pompeo said North Korea could be only months away from developing the ability to hit the United States with nuclear weapons, a scenario Trump has vowed to prevent.

US intelligence experts say Pyongyang believes it needs the weapons to ensure its survival and have been sceptical about diplomatic efforts, focusing on sanctions, to get Pyongyang to denuclearise.

The United States on Thursday imposed sanctions on seven North Korean individuals and three entities for “flagrant” human rights abuses, including killings, torture, forced labor and the hunting down of asylum seekers abroad.

In a speech last month at the United Nations, Trump threatened to destroy North Korea if necessary to defend the United States and allies. Kim has blasted Trump as “mentally deranged.”

Despite the rhetoric, White House officials say Trump is looking for a peaceful resolution. But all options, including military ones, are on the table.

“Do we have military options in defence for attack, if our allies are attacked? Of course we do. But everyone is out for a peaceful resolution,” Mattis told reporters travelling with him this week.

“No one’s rushing for war.”