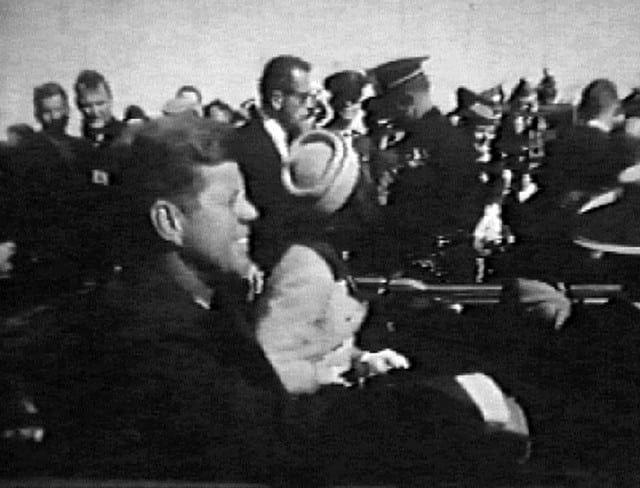 Television footage of President John F. Kennedy and first lady Jacqueline Kennedy are shown in the presidential limousine in the moments before Kennedy was assassinated in Dallas, Texas, on November 22, 1963

US President Donald Trump on Thursday ordered the unveiling of 2,800 documents related to the 1963 assassination of President John F. Kennedy but yielded to pressure from the FBI and CIA to block the release of other records to be reviewed further.

Congress had ordered in 1992 that all remaining sealed files pertaining to the investigation into Kennedy’s death should be fully opened to the public through the National Archives in 25 years, by Oct 26, 2017, except for those the president authorised for further withholding.

Trump had confirmed on Saturday that he would allow for the release of the final batch of once-classified records, amounting to tens of thousands of pages, “subject to the receipt of further information.”

But as the deadline neared, the administration decided at the last minute to stagger the final release over the next 180 days while government agencies studied whether any documents should stay sealed or redacted.

The law allows the president to keep material under wraps if it is determined that harm to intelligence operations, national defense, law enforcement or the conduct of foreign relations would outweigh the public’s interest in full disclosure.

More than 2,800 uncensored documents were posted immediately to the National Archives website on Thursday evening – a staggering, disparate cache that news outlets began poring through seeking new insights into a tragedy that has been endlessly dissected for decades by investigators, scholars and conspiracy theorists.

The rest will be released “on a rolling basis,” with “redactions in only the rarest of circumstances,” by the end of the review on April 26, 2018, the White House said in a statement.

In a memo to government agency heads, Trump said the American people deserved as much access as possible to the records.

“Therefore, I am ordering today that the veil finally be lifted,” he wrote, adding that he had no choice but to accept the requested redactions for now.

A Central Intelligence Agency spokesman told Reuters that every single one of approximately 18,000 remaining CIA records in the collection would ultimately be released, with just 1 per cent of the material left redacted.

CIA Director Mike Pompeo was a lead advocate in arguing to the White House for keeping some materials secret, one senior administration official said.

While Kennedy was killed over half a century ago, the document file included material from investigations during the 1970s through the 1990s. Intelligence and law enforcement officials argued their release could thus put at risk some more recent “law enforcement equities” and other materials that still have relevance, the official said.

Trump was resistant but “acceded to it with deep insistence that this stuff is going to be reviewed and released in the next six months,” the official added.

Academics who have studied Kennedy’s slaying on Nov 22, 1963, said they expected nothing in the final batch of files would alter the official conclusion of investigators that Lee Harvey Oswald was the lone assassin who fired on the president’s open limousine that day in Dallas from an upper window of the Texas Book Depository building overlooking the motorcade route.

They likewise anticipated that the latest releases would do little to quell long-held conspiracy theories that the 46-year-old Democratic president’s killing was organized by the Mafia, by Cuba, or a cabal of rogue agents.

Thousands of books, articles, TV shows and films have explored the idea that Kennedy’s assassination was the result of an elaborate conspiracy. None have produced conclusive proof that Oswald, who was fatally shot by a nightclub owner two days after killing Kennedy, worked with anyone else, although they retain a powerful cultural currency.

“My students are really skeptical that Oswald was the lone assassin,” said Patrick Maney, a professor of history at Boston College. “It’s hard to get our minds around this, that someone like a loner, a loser, could on his own have murdered Kennedy and changed the course of world history. But that’s where the evidence is.”

Kennedy’s assassination was the first in a string of politically motivated killings, including those of his brother Robert F. Kennedy and civil rights leader Martin Luther King Jr., that stunned the United States during the turbulent 1960s. He remains one of the most admired US presidents.