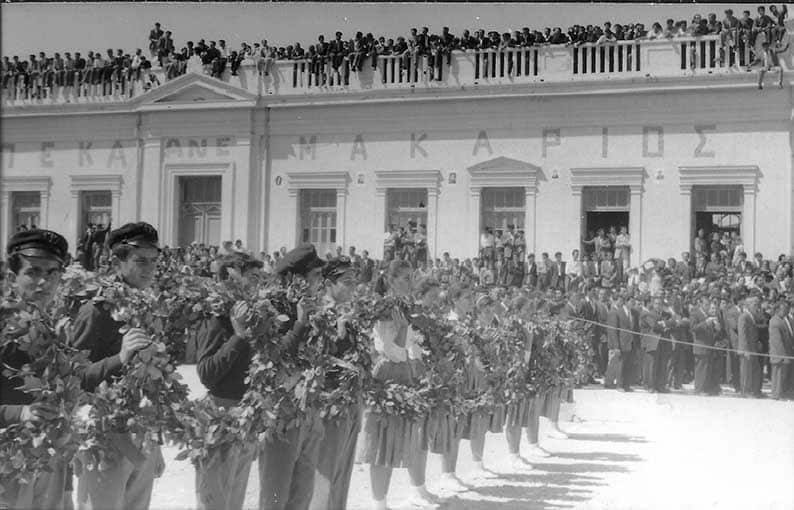 A photograph taken on April 1, 1957, in front of the Propylaia of the Famagusta Greek Gymnasium. The author is the fifth from the left.

THERE is no doubt that good columnists (and, to a greater extent, real leaders) must formulate, rather than follow, public opinion by taking positions which aim at making them popular and likeable. Unfortunately, going against the current requires courage and determination, which are attributes that one rarely comes across. Thus, I am certain to upset some Greek Cypriots with the assertion that the goal of the political union of Cyprus with Greece is obsolete and outdated.

The beginning of the Greek national movement dates back to the end of the 18th and beginning of the 19th centuries. Then, under the influence of the political and ideological messages transmitted by the French Revolution and the Napoleonic Wars, the call for the formation of a modern, properly governed, Greek national state, entailing the unification of all the territories inhabited by Greeks (Greek-speaking Christians) was born.

Admittedly, an equally important factor that contributed to the process leading to the Greek Revolution of 1821 was the support given to the idea by Tsarist Russia, which, since the time of Peter the Great, conceived the vision of a joint struggle of Orthodox Christians against the Turks, under Russia’s leadership. These plans, which included Greece, led to the establishment in 1814 in Odessa of the Filiki Eteria, an undercover organisation committed to working for Greek independence.

The process of establishing a modern Greek state, which commenced at the beginning of the 19th century, lasted many years with failures (such as the disappearance of the thriving Greek-speaking communities in Asia Minor), but also with successes (such as the transfer, in 1947, of the sovereignty over the Dodecanese – then under British command – to Greece).

The last steps of this long process were Cyprus and Northern Epirus (Greek-speaking southern Albania). Thus, we reached the 1950 Cyprus Referendum, which overwhelmingly supported the union of Cyprus with Greece and, shortly thereafter, led to the establishment of EOKA (Greek acronym for the “National Organisation of Cypriot Fighters”), modelled after the Filiki Eteria. Possibly, because of sheer momentum, but also with some help from the British (who wanted to keep Cyprus under their control for securing their own interests in the region), we were led into a clash with Turkish Cypriots. It is ironic that the effort to achieve the political union of Cyprus with Greece not only failed but, in fact, it led to arrangements that explicitly precluded such a possibility (the Zurich and London Treaties).

Many believe that the idea of the “national state”, which dominated the European scene in the 19th century and the first half of the 20th century, provoked the two world wars. The magnitude of the pain and the losses sustained in the course of these wars gave birth, shortly after World War II, to the idea of a politically united Europe.

Unfortunately, the leaders of Cyprus failed to assess correctly the developments, which were taking place on the political scene of Europe, and, as a result of the momentum they had combined with their lack of foresight, they were entrapped into remaining loyal to the vision of creating a united Greek national state. This miscalculation led Cyprus into an inevitable conflict with Turkey but also Britain, whose empire was already at the stage of dissolution and would have led – sooner or later – to the self-determination of Cyprus, as it happened with all the remaining colonies of the crown.

It is true that leaders such as George Vassiliou and Glafcos Clerides and, in Greece, Costas Simitis and Nicos Kranidiotis recognised the importance of these political developments and correctly sought and achieved Cyprus’ accession to the European Union, despite the fact that the condition previously set of the Cyprus Problem being solved prior to entry had not been satisfied. In return, a “promise” was given on the part of Greek Cypriots that the problem would be solved shortly thereafter.

At that stage, the leaders of the Greek Cypriots committed a second tragic mistake. They assumed that Cyprus’ accession to the European Union and the absolute control over the Republic of Cyprus, which they thus secured, would have enabled them to force Turkey and the Turkish Cypriots to accept arrangements “favourable” to the Greek Cypriot side. This assumption has proved wrong by subsequent developments.

Today, the leaders of the Greek Cypriots are committing a third tragic mistake as a result of not having the political maturity to recognise that the union of Cyprus with Greece is obsolete and outdated and, as such, the idea should be abandoned and should be clearly declared as abandoned.

The key recipients of the message (which could be accompanied by the message that “political union” is one thing while “cultural affinity” is something different) should be the Turkish Cypriots.

Somehow, we need to convince them that we respect them and we like them and we would be happy to live along with them. Merely saying so is not enough.