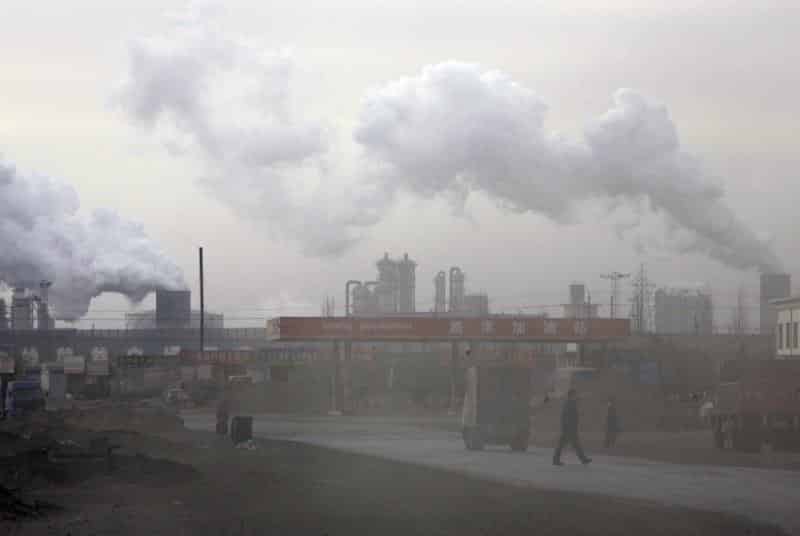 The area near a chemical plant (rear) is seen covered in smoke and dust at an industrial park in Wuhai, in China's northern Inner Mongolia region

The amount of carbon dioxide in the earth’s atmosphere grew at record rate in 2016 to a level not seen for millions of years, potentially fuelling a 20-metre rise in sea levels and adding 3 degrees to temperatures, the United Nations said on Monday.

That growth rate was 50 per cent faster than the average over the past decade, driving CO2 levels 45 per cent above pre-industrial levels and further outside the range of 180-280 ppm seen in recent cycles of ice ages and warmer periods.

“Today’s CO2 concentration of ~400 ppm exceeds the natural variability seen over hundreds of thousands of years,” the WMO bulletin said.

The latest data adds to the urgency of a meeting in Bonn next month, when environment ministers from around the world will work on guidelines for the Paris climate accord backed by 195 countries in 2015.

The agreement is already under pressure because US President Donald Trump has said he plans to pull the United States out of the deal, which seeks to limit the rise in temperatures to “well below” 2 degrees Celsius (3.6 Fahrenheit) above pre-industrial times.

Human CO2 emissions from sources such as coal, oil, cement and deforestation reached a record in 2016, and the El Niño weather pattern gave CO2 levels a further boost, the WMO said.

As far as scientists can tell, the world has never experienced a rise in carbon dioxide like that of recent decades, which has happened 100 times faster than when the world was emerging from the last ice age.

Scientists know prehistoric levels from tiny air bubbles found in ancient Antarctic ice cores, and they can derive even older data from fossils and chemicals trapped in sediment.

The last time carbon dioxide levels reached 400 ppm was 3-5 million years ago, in the mid-Pliocene era.

“During that period, global mean surface temperatures were 2–3°C warmer than today, ice sheets in Greenland and West Antarctica melted and even parts of East Antarctica’s ice retreated, causing the sea level to rise 10–20 m higher than that today,” the WMO bulletin said.

Since 1990, the global warming effect of CO2 and other long-lived greenhouse gases has risen by 40 per cent. The two other main gases – methane and nitrous oxide – also grew to record concentrations last year, although at a slower rate of increase than carbon dioxide.