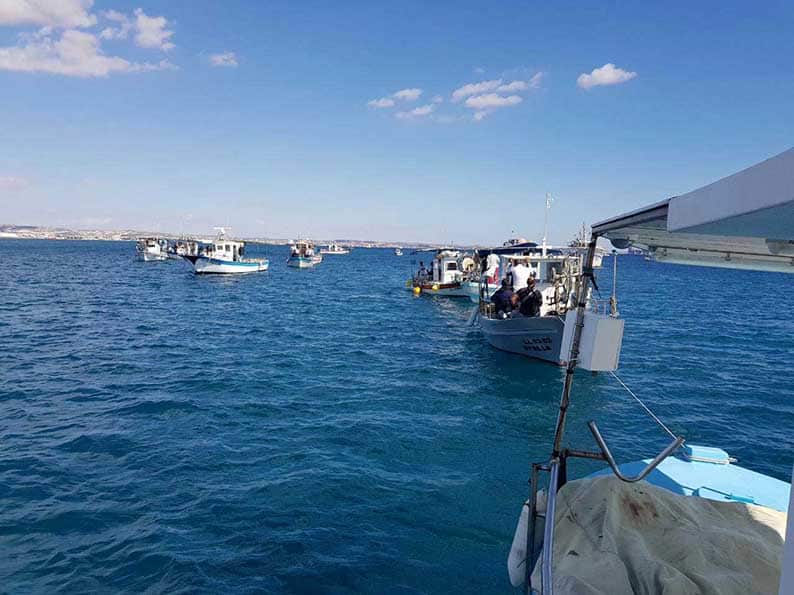 Professional fishermen closed Larnaca port for two hours on Monday morning, protesting against the government’s decision to issue a permit for bottom trawling.

Around 400 professional fishermen, 50 of them from Paphos, gathered from 9am outside the port in Larnaca, arguing that bottom trawlers and their gear clear the seabed and cause great damage to marine species including corals, and if these ecosystems are destroyed, it will take many years for them to come back.

They further argued that this method of fishing would eradicate entire fish populations and many protected species are at risk from this activity.

Head of the professional fishermen association Christodoulos Charalambous said after the protest the fishery department was “pretending” the new six-month permit is for research in order to increase fish populations by studying the red shrimp.

“This is a mockery of the poor and the consumer,” he said, “using the consumer to get a licence for trawlers.”

He added the situation is exactly the same as in 2005, when the first licence was given for a trawler, with the government saying that if the fishermen’s income was harmed by even a little, the licence would be revoked, but on the contrary a permit for a second vessel was issued.

“We are asking the department of fisheries and everyone to show us the checks they have done,” he continued.

“They [the fisheries department] said they will bring cheap fish to the people. But do they think the people are stupid? They are trying to fool people.”

General secretary of farmers union PEK, Michalis Lytras, said the situation was unacceptable because  hiding behind the research programme, the agriculture ministry was granting a permit which would  destroy professional fishermen. He added the union, together with the fishermen would continue to fight against “this unlawful licence given to a single entrepreneur without asking for tenders”.

“Research programmes are carried out only by the department of fisheries and not by private entrepreneurs, and that is why we denounce this unacceptable move by the ministry and the agriculture minister”.

Head of farmers’ union EKA also spoke out against the permit, likening it to “the big fish trying to eat the little ones”, something the union will not allow to happen.

Takis Christodoulou, President of the New Agricultural Movement, commented if the fisheries department is really looking for survey results regarding the red shrimp, it is possible to obtain relevant results from neighbouring countries such as Greece and Italy.

During the two-hour demonstration the fishermen blocked the entrance of the harbour in about thirty boats starting from10am as a symbolic gesture.