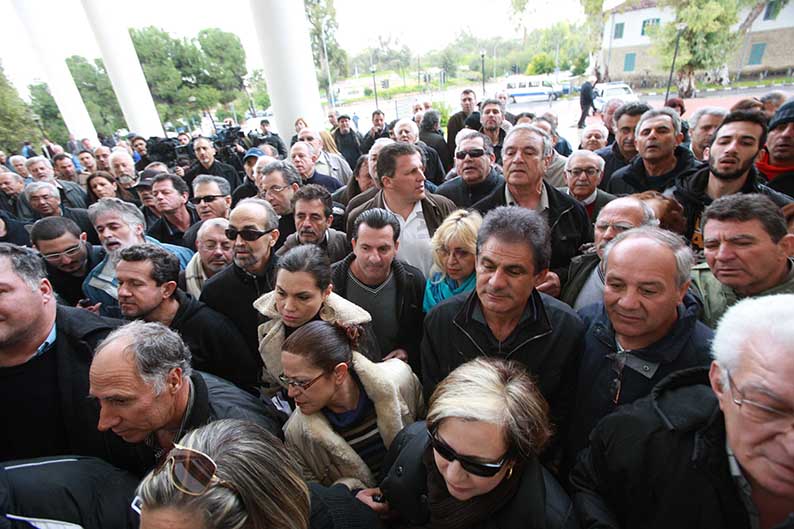 Demonstration by Laiki and BoC bondholders

Disy’s decision to submit together with the Citizen’s Alliance a legislative proposal to set up a compensation fund for victims of the 2013 banking and fiscal crisis has increased expectations among this group who are pressing the government to pledge funds.

While representatives of the Bondholders’ Association and Sykala, a group representing creditors and depositors at Laiki, as the defunct Cyprus Popular Bank was widely known, agreed that the decision of the ruling party was in the right direction, they criticised that amid economic recovery and improving fiscal situation, the government could and should make funds available.

“The government has to submit a legally processed draft law that will be in line with the constitution, to get approvals from Europe, if they are needed, have it enacted and transfer assets to the fund before the parliament Christmas recess,” said Adonis Papaconstantinou who chairs Sykala in an interview to state radio CyBC on Tuesday.

Fed up with “mere expressions of sympathy,” what the group’s members want is “something to be done”, he said.

Papaconstantinou added that, in addition to assets, “money exists”, using a famous phrase used by former Greek prime minister George Papandreou in the 2009 election campaign which came to haunt him the following year, when his government resorted to a massive bailout agreement to avoid running out of cash.

The Disy-Citizens’ Alliance proposal provides merely for setting up the institutional framework to compensate those depositors, bondholders and shareholders who contribute to the Social Insurance Fund, Disy’s leader said on Monday. As the parliament lacks the constitutional capacity to propose expenditure –a privilege reserved to the executive branch– it would be up to the government to come up with a proposal.

According to Diko chairman Nicholas Papadopoulos, who is running for president in next year’s electoins, finance ministry officials regard the Disy proposal as unconstitutional. Papadopoulos proposed last year to compensate victims of the banking crisis with 10 per cent of Cyprus’s primary surplus over the coming years. The chairman of the Citizens’ Alliance Yiorgos Lillikas is also running for president against incumbent President Nicos Anastasiades and Akel’s candidate Stavros Malas.

Phivos Mavrovouniotis, who heads the Bondholders’ Association and has also mounted a single-issue bid for the presidency in hopes of getting leverage for the group he represents, said that the proposal to set up the compensation fund is promising but still not enough.

“There is light at the end of the tunnel and something has to be done during this administration’s term,” which expires in February, he said. “We cannot trust this president any further who has not stuck to the assurances he gave us”.

Bondholders who invested in contingent convertible bonds issued by Bank of Cyprus and Laiki lost €1.5bn. Depositors at Bank of Cyprus who saw almost half of their deposits converted to equity and Laiki who lost all their uninsured deposits, i.e. in excess of €100,000, lost cumulatively €8bn.
Mavrovouniotis criticised the government for allocating funds to finance new projects without taking affected bondholders into account.

“Ahead of the presidential elections, money has fallen from the sky” for projects, he said. “They should prioritise those who die; there are many who die among the bondholders’ and depositors’ associations”.

The draft bill is scheduled to be debated on Monday November 6, in a closed session of the finance committee in the presence of Finance Minister Harris Georgiades.

Water in reservoirs at low level