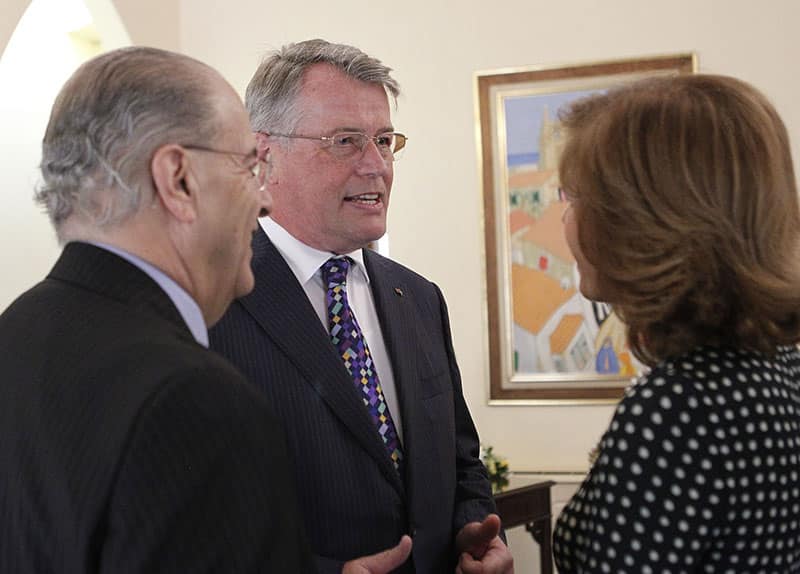 German MEP Reimer Boege was awarded the Medal for Exceptional Service by President Nicos Anastasiades on Tuesday for his services to Cyprus, in particular the enclaved.

Boege proposed an amendment to the European Commission’s 2018 budget to increase funds allocated by the European Union to the Turkish Cypriot community to safeguard the wellbeing of the enclaved plus Maronites wishing to resettle in the north.

The Medal for Exceptional Service is awarded to those who have provided remarkable service in the interest of the Cypriot people, for outstanding contribution to the issues of missing persons in Cyprus and the preservation of the island’s cultural heritage.

“After 43 years of division, Cyprus needs more than ever work that builds trust and bridges between Cypriots – Greek Cypriots, Turkish Cypriots, Maronites, Armenians and Latinos – rather than actions that entrench mistrust and solidify division,” Anastasiades said at the presidential palace after receiving Boege.

The medal, he said, is a token of appreciation and recognition of the heartfelt dedication Boege has tangibly demonstrated throughout his tenure as member of the European Parliament for the European People’s Party, and as a member of the Budget Committee.

“Reimer has been discreetly but effectively at the forefront of the efforts to allocate EU funding in the framework of the Aid Regulation, which was adopted in 2006 to facilitate the reunification of Cyprus and its people, to the bi-communal technical committee for cultural heritage, and the bi-communal committee on missing persons. He has worked closely with Cypriot members of Parliament for a common cause, advancing the interests of Cyprus and its people,” Anastasiades said.

He added that more than €1m from the EU’s budget has been distributed over the past years to restoring more than 66 cultural and religious monuments of great importance to all ethnic communities in Cyprus. As far as the Committee of Missing Persons is concerned, the amount allocated from the EU budget between 2006 and 2017 is close to €20m, he said.

He told Boege, that in him, Cyprus has found a true and valuable friend.

The German MEP, who is married to a Cypriot Maronite, said that all the work he has done for Cyprus comes from his heart and he feels Cyprus is a second mother-country to him.

He said the projects for the missing persons in Cyprus and the cultural heritage represent a path for reunification and common understanding.

“Tolerance is the spirit of the EU and we need tolerance in our brains and in our heart,” he said.

Following the award ceremony, Foreign Minister Ioannis Kasoulides said he fully backs the amendment proposed by Boege and supports the resettlement of the Maronites in their villages in the north.

Maronites, he said, are part of the Greek Cypriot community and they should be treated the same way as everyone else.

Boege’s amendment on the Maronites was voted last week by the European parliament – 414 MEPs voted for, 163 voted against and 99 abstained. Total funding to the Turkish Cypriot community under the amendment would be €34.5 million.

None of the six Cypriot MEPs voted for the amendment however, with Diko’s Costas Mavrides and Edek’s Demetris Papadakis voting against, while Disy’s Lefteris Christoforou and Akel’s Neoclis Sylikiotis and Takis Hadjigeorgiou abstaining. Solidarity leader Eleni Theocharous – Cyprus’ sixth MEP, who was absent from Wednesday’s vote – also voiced disagreement with the amendment.

Mavrides and Papadakis said they voted against it after an amendment they had proposed on the wording was not adopted following the insistence of the Cypriot government on sticking to the original text.

“They wanted the word resettlement to be deleted. I believe that it is not a negative thing that they want to resettle, as long as conditions allow, as long that is, the military leaves their villages,” Kassoulides said.

Last July, days after an international conference on Cyprus failed to produce an agreed solution to the Cyprus problem, the Turkish Cypriots announced they would allow Maronites who lived in four villages in the north and were displaced following the 1974 Turkish invasion to return to their homes.