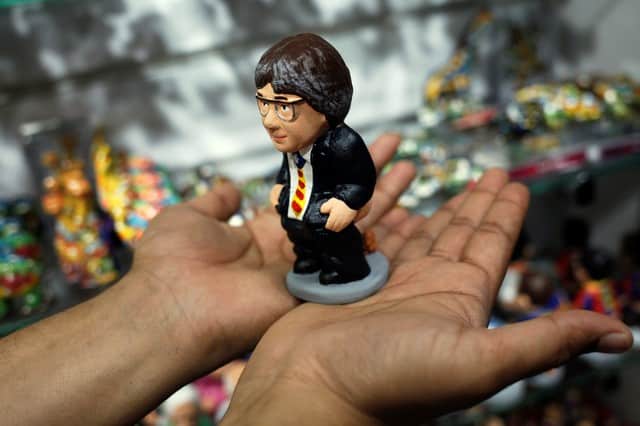 A vendor shows a mud figure of Catalan President Carles Puigdemont, known as "caganer" (defecator in Catalan), with a tie with the colours of an Estelada (Catalan separatist flag) in a souvenir shop at Sant Jaume square in Barcelona

Catalonia’s ousted leader Carles Puigdemont said on Tuesday he accepted the snap election called by Spain‘s central government after Madrid took control of the region to block its push for independence.

Puigdemont, speaking at a news conference in Brussels, also said he was not seeking asylum in Belgium after Spain‘s state prosecutor recommended charges for rebellion and sedition be brought against him. He would return to Catalonia when given “guarantees” by the Spanish government, he said.

Puigdemont’s announcement that he would accept the regional election on Dec. 21 confirmed that the Madrid government had gained the upper hand in the protracted struggle over Catalonia, for now at least.

Resistance to Madrid’s imposition of direct control on Catalonia failed to materialise at the start of the week and the secessionist leadership is in disarray.

Spain‘s Constitutional Court on Tuesday blocked the unilateral declaration of independence made by the regional parliament on Friday, a move that gained no traction and led to its dismissal less than an hour after it was made.

“I ask the Catalan people to prepare for a long road. Democracy will be the foundation of our victory,” Puigdemont said.

The Spanish government has said Puigdemont was welcome to take his chances and stand in the Dec. 21 election, called by Prime Minister Mariano Rajoy as a way to resolve the stand-off.

The political crisis, Spain‘s gravest in the four decades since the return of democracy in the late 1970s, was triggered by an independence referendum in Catalonia on Oct. 1.

Though it was declared illegal by Spanish courts and less than half Catalonia’s eligible voters took part, the pro-secessionist regional government said the vote gave it a mandate for independence.

European nations including Britain, Germany and France have backed Rajoy and rejected an independent Catalan state, although some have called for dialogue between the opposing sides.

As Madrid began direct rule of Catalonia, Attorney General Jose Manuel Maza called for charges of rebellion, sedition, fraud and misuse of funds to be brought against Catalan leaders who organised an illegal referendum on independence from Spain.

The Oct 1 vote in the prosperous region with its own language and culture has triggered Spain‘s biggest crisis in decades. On Friday, Spanish Prime Minister Mariano Rajoy dismissed Catalonia’s secessionist government, called a regional election for Dec 21 and said the central government would take direct control.

That process began smoothly on Monday as employees ignored calls for civil disobedience and turned up for work, while secessionist parties agreed to stand in the December poll.

A look at light and colour