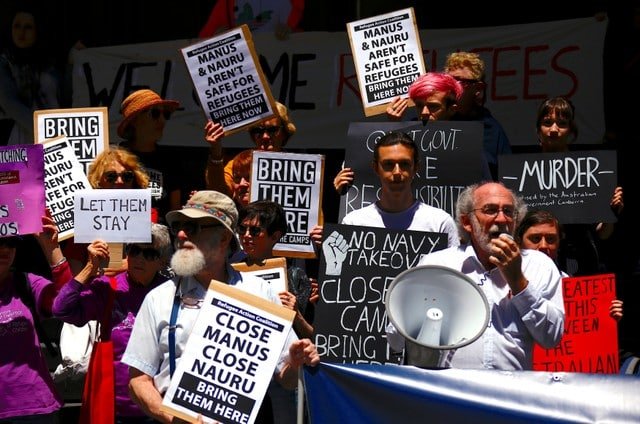 Australian private security on Tuesday vacated an asylum seeker detention centre in Papua New Guinea (PNG) ahead of its planned closure, detainees said, leaving about 600 refugees and asylum seekers barricaded inside and refusing to move.

Detainees are defying attempts by Australia and PNG to close the controversial Manus Island centre, saying they fear violent reprisals from the local community if they move to a transit centre.

Despite threats that water and power supply to the camp would be cut by 5 pm (0700 GMT), asylum-seekers told Reuters after the deadline that half the camp still had power at 10.30 pm (1230 GMT), along with access to water.

The Manus centre has been a key part of Australia‘s controversial “Sovereign Borders” immigration policy. The country refuses to allow asylum seekers arriving by boat to reach its shores, detaining them in camps in PNG and Nauru in the South Pacific.

Lawyers for some of the 600 men filed a last-minute lawsuit in PNG to prevent the camp’s closure and allow the men to be relocated to a third country. A ruling is expected on Wednesday.

The detainees were left alone for the first time in more than four years after camp staff all left on Tuesday morning, Sudanese refugee Abdul Aziz told Reuters.

“The water and electricity are still on but we are vulnerable now after the staff left us all alone,” Aziz said.

The camp’s impending closure is part of an Australian government plan to push refugees and asylum seekers to return to their home country, settle in PNG or move elsewhere, so dismantling part of the costly and controversial offshore detention programme.

The United Nations and rights groups have for years cited human rights abuses among detainees in the centres.

Detainees have consistently raised concerns over how they are treated by locals and authorities in PNG, a country that ranks 154th out of 185 on the United Nation’s Human Development Index.

Australian Immigration Minister Peter Dutton refused to comment on the departure of theAustralian-employed security staff on Manus, but said the camp’s closure would proceed.

“All have been informed for a considerable period of time that there is safe and secure alternate accommodation where health and other services will be maintained,” Dutton said in an emailed statement.

Australia has already said it would spend up to A$250m to house the men for the next 12 months. Just under 200 men have already been moved.

The relocation of the men is designed as a temporary measure, allowing the United States time to complete vetting of refugees as part of a refugee swap deal.

Asylum seekers said several unidentified local men had arrived at the camp and taken away furniture from common areas. Videos images shot by the refugees and sent to Reuters show vans loaded with furniture departing, though it is not clear where the vehicles were from.

Conditions for the refugees were unbearable, said Nick McKim, a senator with the Australian Greens Party who is on Manus.

“I can only describe what is happening on Manus now as a humanitarian emergency,” McKim told Reuters. “It is 31 degrees Celsius (88 Fahrenheit) today and drinking water will be cut off.”

PNG has sent paramilitary services to oversee the closure.

Most of the detainees come from war-torn countries such as Afghanistan, Iran, Myanmar, Pakistan, Sri Lanka and Syria.

“I would be absolutely terrified to be in that situation and I cannot understand why the government just simply will not say enough is enough … we need to bring them here to Australia,” said refugee advocate Dr Barri Phatarfod, who joined in a small protest against refugee policies in Sydney on Tuesday.