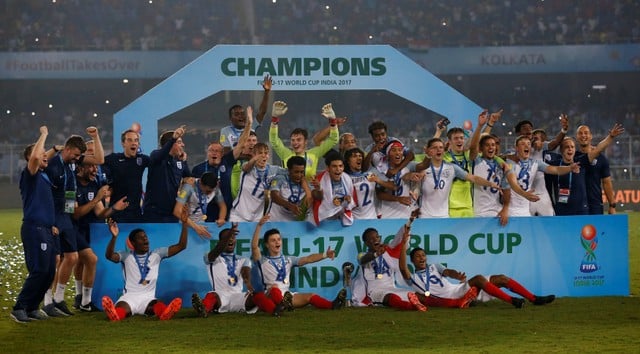 In winning the Under-17 World Cup, to follow the triumph at Under-20 level, England's youngsters have challenged the gloomy narrative that football in their country is in terminal decline

The cynicism that greeted the England senior team’s qualification for the 2018 World Cup has been replaced by genuine excitement of a bright future after the stunning exploits of the country’s age-group teams.

In winning the Under-17 World Cup, to follow the triumph at Under-20 level, England’s youngsters have challenged the gloomy narrative that football in their country is in terminal decline.

While few expect Gareth Southgate’s senior England side to light up Russia next year, the teenage Lions have roared out a message that better things might be around the corner.

The 5-2 comeback triumph over Spain in Saturday’s Under-17 final in India capped an extraordinary year for England’s young guns.

In June, England beat Venezuela to secure the Under-20 world title and a month later became Under-19 European champions.

“For me, it’s recognition of where English football not just is, but where it can go and where we want it to go,” said England Under-17 manager Steve Cooper.

“This trophy is a dedication to the good work being done back in England with the club academies and the development of young players.”

Cooper was not the only one to view the successes in the context of the Football Association’s strategy.

“It’s fantastic evidence that we have the best youth developers in the world in this country and they are developing the best players in the world,” former FA Technical Director Howard Wilkinson told the Guardian.

“But it’s not a transformation – this has been a long progression that started with the introduction of academies and the building of St George’s Park. Once that was in place, it’s all been about the benefit of having a plan and sticking to it.”

The 105 million-pound investment in the St. George’s Park training facility and the attempt to get all age groups sticking to the same blueprint is delivering results.

“Football in England is growing in an incredible way,” said Conte, the former Italy coach.

“I am sure that in the future it will be difficult to beat the England national team. I think that when you have this movement behind you, you can have a great possibility to have a strong team for the next World Cup.”

The counter argument is that young talent, such as Under-17 standouts Rhian Brewster and Phil Foden will find their route to Premier League first teams blocked by lack of opportunity.

“English football is not like German football or Spanish football,” former West Ham United and Sunderland manager Sam Allardyce, who was briefly in charge of England, wrote in The Times.

“We still call it the English league, but in reality it is now an international league that is played in England.

“And because the financial rewards of staying in the league – or qualifying for the Champions League – are so great, the development of young players is an afterthought at best.”

Nonetheless, a look at the squad list indicates that the big clubs are contributing to England’s success.

Exciting midfielder Foden came through Manchester City’s academy system having been identified as a 10-year-old. City, like Chelsea, farm out their young players to other clubs in order to test them in competitive environments and such an approach is often misunderstood.

“We did some research last year and discovered that in the last 10 years 83 percent of players who featured in the quarter-final stage of the Champions League had all played first-team football at 17,” said Brian Marwood, Manchester City’s Football Administration Officer.

“Seventeen of our loanees could play in our Elite Development Squad. However, a decision was made to have them playing first-team football somewhere and I believe it’s the right thing.”

But for all the strategies and decisions in the development sphere, most fans will judge the FA’s work by how close the senior team can get to a repeat of their 1966 World Cup triumph – England’s only major international trophy.

Southgate’s team next year should feature exciting young players such as Dele Alli and Harry Kane of Tottenham and Manchester United’s Marcus Rashford but it will be another cycle or more before the world-beating teenagers get their chance.

“We have to change people’s perceptions. We want to inspire a nation by being successful.”

Tunnel collapse ‘may have killed 200 after N. Korea test’