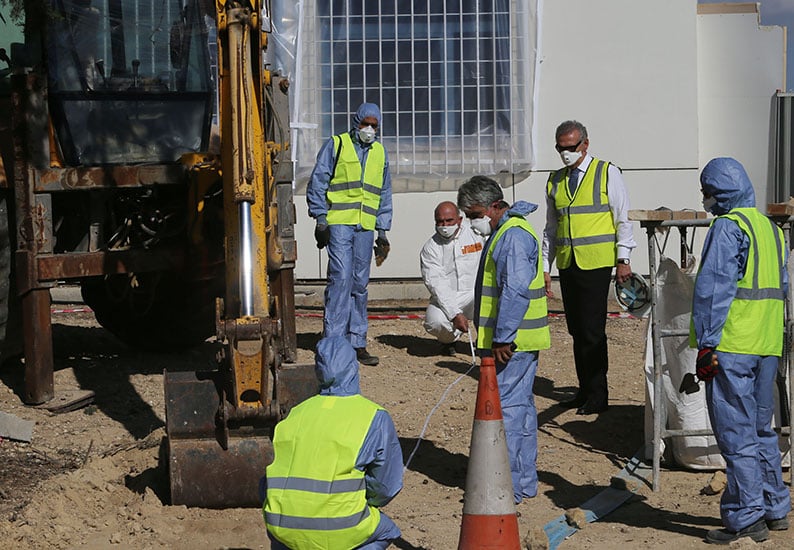 Excavation work to retrieve the remains of 31 victims of a bomb dropped during the first leg of the invasion of the northern part of Cyprus by the Turkish air force on July 20, 1974, at the location where the Nicosia General hospital has since been built started on Wednesday.

According to reports, 28 of the victims of the bombing of the Athalassa psychiatric hospital were Greek Cypriots and three were Turkish Cypriots, while the bodies two other victims, a nurse and a soldier, were transported elsewhere and buried properly at a later time.

According to the Cyprus News Agency, the exact location of the remains was identified via an exploratory excavation, with proper digging expected to take up to four weeks.

Commissioner for Humanitarian Affairs Photis Photiou, who was briefed on the technical side of the excavation by Xenofon Kallis, the Foreign ministry’s point-man on humanitarian affairs, told reporters that this will be another difficult exhumation.

“This is why there is specialised staff here – Mr Kallis leads this group of scientists comprising several state agencies and foreign scientists, who I am sure will do everything possible to make this excavation a success,” he said.

The exhumation, Photiou added, is a moral obligation to the victims’ relatives.

“It is truly a shame because we have delayed 43 years – for 43 years our fellow Cypriots have been buried here,” he said.

“This exhumation should have happened a lot earlier, because it is our obligation to provide answers to the relatives, but above all to give the identified remains so that proper religious burials can be done.”

Government agencies are also in contact with the families of the three Turkish Cypriot victims and will keep them updated on any developments, the commissioner added.

“We know the crater created by the bomb is here and the bones are here, because this had been demonstrated by the exploratory excavation, but we don’t know what other problems we might face,” Photiou said, referring to the discovery of traces of asbestos during initial digging.

“We also don’t know whether the excavation will reveal a number of more than 31 bodies. No one knows whether the number is confined to the official list of names we have, or whether there are more we don’t know about.”

Photiou said that the precise age of each victim is not known, but it is known that the official body count includes seven women.

Kallis explained that, as with each exhumation, there are particularities and challenges.

“We are in a position to cope, we have the experience and the expertise and the staff, but like every other exhumation maybe this one hides secrets that we will find out on the way,” he said.

“As a citizen of the Republic of Cyprus, I would like to say that this exhumation sends some messages relating to the state’s responsibilities to its people and the quality of our society.”

Ousted Catalan leader ‘will not return to Spain to testify’