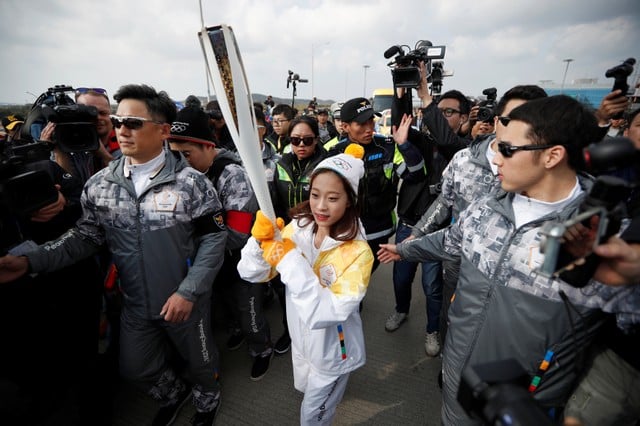 The Olympic flame arrived in South Korea on Wednesday to begin its journey towards the 2018 Pyeongchang Games, lighting the blue touchpaper on a winter sports spectacular that organisers say will help promote peace on the Korean peninsula.

Flown in from Athens following a handover ceremony at the Panathenaic Stadium, which hosted the first modern Games in 1896, the flame arrives at a time of heightened tensions over North Korea’s nuclear and missile programs.

South Korea’s top priority is to deliver a “safe and secure” Olympics but there is little doubt international confidence in the Games has been undermined by the threats and insults exchanged by US President Donald Trump and North Korea leader Kim Jong Un in recent months.

In October, France’s sports minister raised the possibility of a boycott if the crisis deepened, while Seoul has been moved to reassure top foreign diplomats that the Games, taking place just 80 km (50 miles) from the world’s most-heavily armed border, will be safe.

Despite the long shadow of security concerns cast over the Games, the message on Wednesday was one of peace and hope. Of the power of sport to overcome division, and, as the torch relay slogan goes – to “Let everyone shine”.

South Korean sports minister Do Jong-hwan and 2010 Vancouver Games figure skating champion Kim Yuna carried the flame in a special lantern as they gingerly stepped off a Korean Air flight at Incheon airport on Wednesday.

Organising chief Lee Hee-beom described the arrival of the flame as “a very significant moment” in Korea’s history and promised athletes and visitors they would have “the time of their lives” during the Feb. 9-25 Games.

“The wait is over for South Korea. We are now 100 days to the Olympic Games,” he said at a ceremony.

“The Olympic Games and the Olympic flame are symbols of hope and peace. The Games have the power to bring the world together.”

Figure skater Kim and Prime Minister Lee Nak-yeon then lit a cauldron with the Olympic flame, which was last seen in South Korea almost 30 years ago during the 1988 Seoul Summer Games, signalling the start of the torch relay.

Robots, cable cars, steam locomotives and zip wires are some of the methods of transportation that will take the torch along its 2,018 km route through nine provinces and eight major cities before arriving in Pyeongchang, some 180 km east of Seoul.

The first of 7,500 torchbearers was local figure skater You Young, the 13-year-old who Koreans hope will one day emulate former champion Kim.

“It is my dream to represent my country at an Olympic Winter Games and I am working hard to make that dream a reality very soon,” said You, who became the country’s youngest national champion aged 11.

Kim retired after winning silver at the 2014 Sochi Olympics and her absence from the competition in Pyeongchang is one of the reasons being cited for lacklustre ticket sales.

But Kim may yet have a major part to play at the Games as she is widely tipped to be the final torchbearer who lights the Olympic cauldron on Feb. 9.

The Games will feature approximately 3,000 athletes from 95 NOCs, though there has been no confirmation whether North Korea plan to take part.

The International Olympic Committee is eager to have North Korean athletes at the Games, though only figure skaters Ryom Tae Ok and Kim Ju Sik have met the qualifying standard.

The two Koreas are still technically at war after their 1950-53 conflict ended in a truce not a peace treaty.