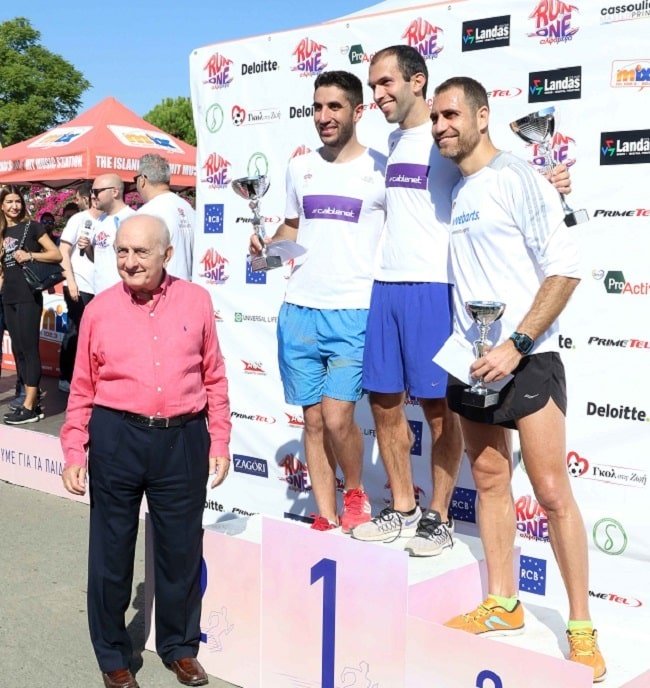 With 2,000 runners across the age spectrum participating, the ALPHAMEGA “Run As One” race was held on Sunday (October 22nd), which was part of the CSR programme “Child, Nutrition & Health”

Christoforos Protopapas from Dro.Me.A Racing and Maria Yiavasi from Keravnos landed first place at the Half-Marathon of the 2nd ALPHAMEGA “Run As One” race, which was held on the morning of Sunday, October 22nd, in Engomi, with more than 2,000 participating runners. Protopapas finished the race in 1 hour, 18 minutes and 53 seconds, one of this year’s top performances by a Cypriot half-marathon runner.

The 2nd ALPHAMEGA “Run As One” event also included an individual and corporate races of 5 kilometres, as well as a 1-km race, in which children up to 12 years of age ran for free. The 5-km men’s race was won by Marios Apostolides (16 minutes and 46 seconds), while Avramis Avraam (17:11) and Christoforos Protopapas (18:04) clinched second and third place. Meropi Panayiotou (18:55) won the women’s race, with Elpida Christodoulidou (19:13) and Chrystalla Hadjipolidorou (19:58) in second and third place.

The ALPHAMEGA “Run As One” race was part of ALPHAMEGA Hypermarkets’ corporate social responsibility programme “Child, Nutrition & Health”, to which all proceeds will go. The Cyprus association of nutritionists also backed the event. Along with the race, several other activities were organized, while children enjoyed several surprises.

The event was sponsored by Primetel and Deloitte, with Landas Colour providing printing. RCB Bank, ACS Courier, Zagori mineral water, Universal Life, Lucozade and Kasoulides printing were also sponsors. The event was supported by the football players’ organization of volunteerism and charity “Goal in Life”, Brec and the Strovolos, Engomi, Nicosia and Ayios Dometios municipalities.

Ministry not responsible that bus company salaries not paid