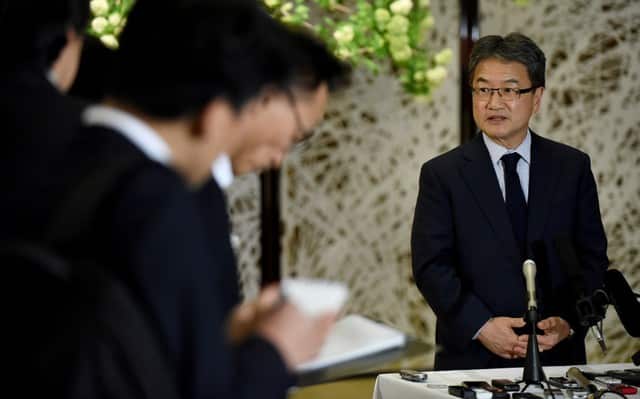 The United States is quietly pursuing direct diplomacy with North Korea, a senior State Department official said on Tuesday, despite US President Donald Trump’s public assertion that such talks are a waste of time.

Using the so-called “New York channel,” Joseph Yun, US negotiator with North Korea, has been in contact with diplomats at Pyongyang’s United Nations mission, the official said, at a time when an exchange of bellicose insults between Trump and North Korean leader Kim Jong Un has fuelled fears of military conflict.

While US Secretary of State Rex Tillerson on Oct 17 said he would continue “diplomatic efforts … until the first bomb drops,” the official’s comments were the clearest sign the United States was directly discussing issues beyond the release of American prisoners, despite Trump having dismissed direct talks as pointless.

There is no sign, however, that the behind-the-scenes communications have improved a relationship vexed by North Korea‘s nuclear and missile tests, the death of US university student Otto Warmbier days after his release by Pyongyang in June and the detention of three other Americans.

Word of quiet engagement with Pyongyang comes despite Trump’s comments, North Korea‘s weapons advances and suggestions by some US and South Korean officials that Yun’s interactions with North Koreans had been reined in.

“It has not been limited at all, both (in) frequency and substance,” said the senior State Department official.

Among the points that Yun has made to his North Korean interlocutors is to “stop testing” nuclear bombs and missiles, the official said.

North Korea this year conducted its sixth and most powerful nuclear detonation and has test-fired a volley of missiles, including intercontinental ballistic missiles (ICBMs) that, if perfected, could in theory reach the United States mainland.

The possibility that Pyongyang may be closer to attaching a nuclear warhead to an ICBM has alarmed the Trump administration, which in April unveiled a policy of “maximum pressure and engagement” that has so far failed to deter North Korea.

At the start of Trump’s presidency, Yun’s instructions were limited to seeking the release of US prisoners.

“It is (now) a broader mandate than that,” said the State Department official, declining, however, to address whether authority had been given to discuss North Korea‘s nuclear and missile program.

“We encourage North Korea and the United States to carry out engagement and dialogue,” Hua told reporters, adding that she hoped talks could help return the issue to a diplomatic track for resolution.

NATO chief Jens Stoltenberg has urged all United Nations members to fully and transparently implement sanctions against North Korea, which he said has emerged as a global threat.

Speaking at the United Nations on Sept 19, Trump vowed to “totally destroy” North Korea if it threatened the United States or its allies, raising anxieties about the possibility of military conflict.

Twelve days later, after Tillerson said Washington was probing for a diplomatic opening, Trump said on Twitter that his chief diplomat was “wasting his time trying to negotiate with Little Rocket Man” – his mocking nickname for the North Korean leader.

Democratic US senators introduced a bill on Tuesday they said would prevent Trump from launching a nuclear first strike on North Korea on his own, highlighting the issue days before the Republican’s first presidential trip to Asia.

A high-ranking North Korean defector said in Washington on Tuesday that he backed the Trump administration’s policy of pressuring Pyongyang through sanctions, coupled with “maximum engagement” with the leadership and increased efforts to get information into North Korea to educate its people.

“I strongly believe in the use of soft power before taking any military actions,” Thae Yong Ho, chief of mission at Pyongyang’s embassy in London until he defected in 2016, told the Centre for Strategic and International Studies.

The New York channel is one of the few conduits the United States has for communicating withNorth Korea, which has itself made clear it has little interest in serious talks before it develops a nuclear-tipped missile capable of hitting the continental United States.

The last high-level contact between Yun and the North Koreans was when he traveled to North Korea in June to secure the release of Warmbier, who died shortly after he returned home in a coma, the State Department official said.

Warmbier’s death was a factor in the chilling of US-North Korean contacts around that time but the biggest impact came from Pyongyang’s stepped-up testing, the official said.

The official said, however, that “the preferred endpoint is not a war but some kind of diplomatic settlement” and suggestions that Washington is setting up a binary choice for Pyongyang to capitulate diplomatically or military action were “misleading.”

Diplomacy, the official said, “has a lot more room to go.”

But Trump’s threats against North Korea are believed to have complicated diplomatic efforts.