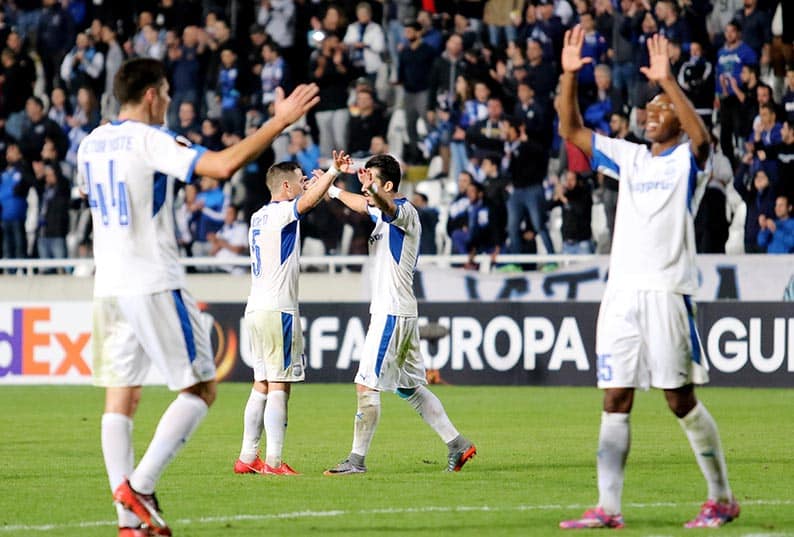 Apollon celebrate after the match

Apollon scored deep into injury time at the GSP Stadium on Thursday night to rescue a point against Atalanta (1-1).

For the third time in four Europa League group games this campaign, Sofronis Avgousti’s men managed to claim a draw just when the game looked to be beyond them.

The Cypriots knew that they had to go for the win in order to stand a realistic chance of qualifying for the next round, and Alex Da Silva looked keen to set the tone for his side early on

The veteran midfielder unleashed a strike from around 35 yards out which had goalkeeper Etrit Berisha scrambling across his line, and relieved to see the shot go just wide of the post.

The game’s first clear chance came for the visitors at 18 minutes, after a hoisted ball into the box was flicked on by the head of Andrea Petagna, which fell to Andrea Masiello at the back post but the 31-year-old drove his shot well wide.

Atalanta again came close, this time through the ever-dangerous Josip Ilicic. Hans Hateboer’s perseverance down the right flank created the opportunity but the Slovenian’s effort was deflected over the bar.

Da Silva, clearly confident from his earlier effort from distance, tried a speculative shot from even further out, and with his weaker foot, which did little to trouble Berisha.

The game’s next goal was to be vital either way, and Apollon came within inches of conceding it early in the second half. Mattia Caldara nodded the inswinging corner to teammate Petagna, whose instinctive header had Bruno Vale beaten. Luckily for the Apollon keeper, the post came to his rescue.

The second period was a scrappy affair, with a series of rough challenges interrupting the flow of the game. The Apollon faithful, still feeling aggrieved at the earlier reward of the penalty, sought to pressure the referee at every given attempt, with a half-hearted appeal for a spot-kick of their own turned down.

At 80 minutes came a rare Apollon chance. Anton Maglica at full stretch managed to get his head on the end of a slow, lofted cross, forcing the keeper into his first meaningful stop of the night.

But, despite looking unconvincing all night, Apollon managed to muster the spirit for yet another dramatic finish, just as they did against Lyon and Everton on Matchday One and Two respectively. In the 94th minute, Joao Pedro’s cross found Emilio Zelaya who headed into the bottom corner to rescue yet another point for the Limassol side.

In the bigger picture, however, the result serves very little for Apollon’s hopes of reaching the next stage of the competition.

Lyon’s 3-0 win over Everton in the group’s other game sees the French club go joint-level with Atalanta on eight points, meaning that Apollon, on three points, needs to win their last two matches and hope other results go their way. Apollon’s next match is away at Lyon on 23 November.

Turkey has not yet found Mediterranean gas