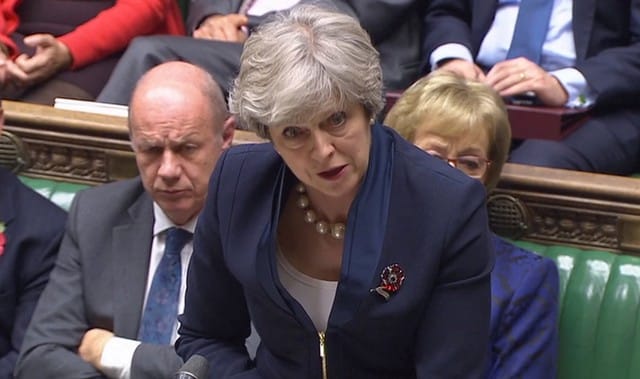 British Prime Minister Theresa May was forced to appoint a new defence minister on Thursday after her loyal ally Michael Fallon quit in a sexual harassment scandal that has prompted calls for an end to the “locker room” culture in parliament.

Just hours after Fallon resigned over past behaviour he said had fallen “below the high standards we require of the armed forces”, May appointed Gavin Williamson, 41, a rising star in her ruling Conservative Party.

Weakened after losing her party’s parliamentary majority in a June election, May had to move swiftly to plug the hole in her divided cabinet. Fallon’s departure was another blow for her as she has struggled to hold the cabinet together since the vote, which many Conservative Party members blamed on her.

The growing harassment scandal could damage May if further allegations against members of her Conservative Party, including against her deputy Damian Green, force more resignations.

“The Queen has been pleased to approve the appointment of Rt Hon Gavin Williamson as Secretary of State for Defence,” May’s spokesman said.

Williamson has risen quickly up the ranks of the Conservatives and is loyal to May after she selected him last year as the party’s chief whip in parliament – a role in which he is tasked with maintaining voting discipline on legislation.

But he has no former experience of the armed forces, according to his online profile, and Howard Wheeldon, a defence analyst, said he was “bound to worry about the depth of experience in such a vital area as defence”.

As chief whip, Williamson was renowned for his toughness and for introducing lawmakers to his pet tarantula called Cronus.

He told Conservative members at the party’s annual conference earlier this year: “I don’t very much believe in the stick, but it’s amazing what can be achieved with a sharpened carrot.”

Williamson said nothing as he arrived at the Ministry of Defence on Thursday, taking on the role at a difficult time for May, who since June’s election is dependent on the support of a small Northern Irish party for a majority in parliament.

Fallon’s resignation was yet another blow.

Described by Conservative sources as a political “Rottweiler”, Fallon was a trusted minister able to robustly face down criticism of the government.

But sexual abuse allegations against Hollywood producer Harvey Weinstein have prompted hundreds of thousands of women and men to share stories about improper behaviour andBritain‘s parliament has been no exception.

Ruth Davidson, leader of the Conservatives in Scotland, said it was time to break with a culture in politics where powerful people “use positions of power to demand things from others”.

“The dam has broken on this now, and these male-dominated professions where the boys-own locker room culture has prevailed and it’s all been a bit of a laugh, have got to stop,” she told the BBC.

Allegations of sexual abuse have ranged from a charge of rape by an activist in the opposition Labour Party by a senior party member, to unconfirmed details of serial “sex pests” on a list reportedly drafted by aides and researchers in parliament.

May has ordered investigations into a report that one of her ministers asked a female secretary to buy sex toys and an allegation that her deputy, Green, made an inappropriate sexual advance on a young woman – something he denies.

The prime minister, who has long championed the careers of female lawmakers, said on Wednesday that action would be taken when there were allegations and evidence of sexual misconduct.

Bank of England hikes rates for first time in a decade