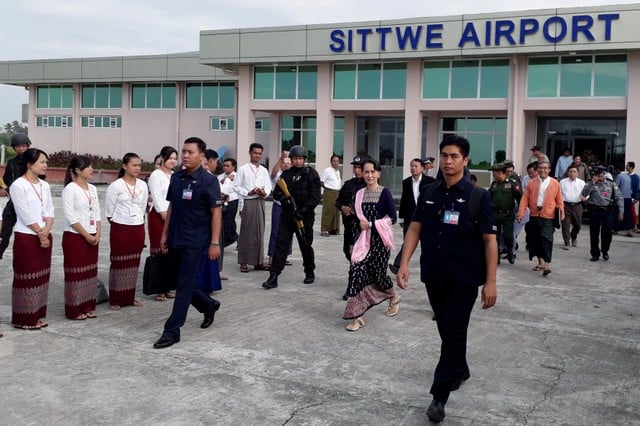 Myanmar‘s de facto leader, Aung San Suu Kyi, on Thursday urged people “not to quarrel” as she visited Rakhine State for the first time since a military crackdown that drove more than 600,000 Rohingya Muslims to flee the country.

Suu Kyi, a Nobel Peace Prize winner, has faced heavy international criticism for not taking a higher profile in responding to what UN officials have called “ethnic cleansing” by the army.

On Thursday, amid heightened security, Suu Kyi boarded a military helicopter at Sittwe, the capital of Rakhine State, to be taken to Maungdaw, one of districts worst hit by the violence.

“She only said three things to the people – they should live peacefully, the government is there to help them, and they should not quarrel among each other,” Lewa said, quoting information from a religious leader who was present.

On Wednesday, Reuters photographers saw thousands of desperate Rohingya wade through shallows and narrow creeks between islands of the Naf river to reach neighbouring Bangladesh as the exodus begun two months ago was far from over.

Some had small boats or pulled makeshift rafts to get to Bangladesh on the river’s western bank, but most walked, children cradled in their arms and the elderly carried on their backs, with sacks of belongings tied to staves on their shoulders.

Reaching the far side, some women and older people had to be pulled through the mud to reach dry land atop steep banks.

More than 4,000 crossed at different points on the river on Wednesday, Major Mohammed Iqbal, a Bangladesh security official in the southern district of Cox’s Bazar, told Reuters.

Suu Kyi had not previously visited Rakhine since assuming power last year following a landslide 2015 election victory. The majority of residents in the northern part of the state, which includes Maungdaw, were Muslims until the recent crisis.

Suu Kyi was accompanied by about 20 people travelling in two military helicopters, including military, police and state officials, a Reuters reporter said.

Businessman Zaw Zaw, formerly sanctioned by the US Treasury for his ties to Myanmar‘s junta, was also with the Nobel laureate.

Suu Kyi, who does not control the military, has lately appeared to take a stronger lead in the crisis, focusing government efforts on rehabilitation and pledging to repatriate refugees.

She launched a project last month to help rehabilitation and resettlement in Rakhine and has urged tycoons to contribute.

Suu Kyi has pledged to allow the return of refugees who can prove they were residents ofMyanmar, but thousands of people have continued to flee to Bangladesh.

Refugees in the Bangladesh camps say the Myanmar army torched their villages, but Myanmarblames Rohingya militants.

Talks with Bangladesh have yet to deliver a pact on a repatriation process made more complex because Myanmar has long denied citizenship to the Rohingya.

Suu Kyi’s spokesman voiced fears on Tuesday that Bangladesh could be stalling on the accord to first get millions of dollars of international aid money, an accusation a senior Bangladesh home ministry official described as outrageous.

In a statement issued on Thursday after a two-day visit to Myanmar, Turk, the UN’s assistant high commissioner for refugee protection, said he hoped the UNHCR would be involved in the government’s plans for voluntary repatriation.

But the scenes at the Naf river showed Rohingya were still ready to risk being destitute in Bangladesh, rather than stay in Myanmar in fear for their lives.