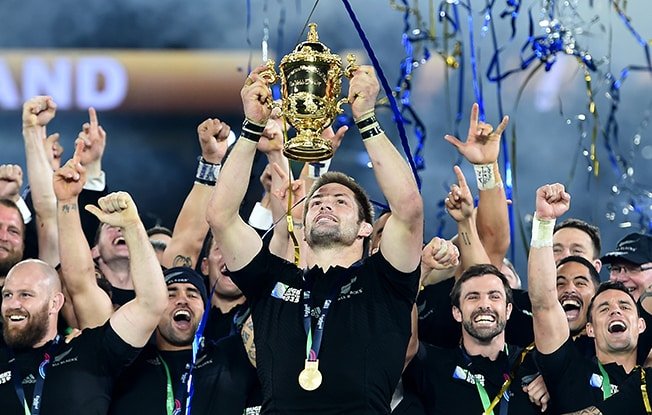 New Zealand will kick-off their World Cup title defence with a heavyweight clash against South Africa, the only first round match between former tournament winners

Champions New Zealand will kick off their World Cup title defence with a heavyweight clash against South Africa, organisers said on Thursday, the only first round match between former tournament winners.

Hosts Japan will open Asia’s first Rugby World Cup against a yet to be determined European side in Pool A, with Ireland next on their schedule. Ireland will play Scotland in their first match.

Organisers on Thursday announced the schedule for all 48 matches at the ninth Rugby World Cup, to be held Sept. 20 to Nov. 2, 2019, as well as their ticketing programme.

Brett Gosper, chief executive of World Rugby, told reporters the schedule was designed to maximise rest days and minimise travel time, calling it the “most balanced schedule” for teams in a bid to prioritise performance and competitiveness.

“No tier two team will play a tier one team after a short turnaround. For instance, teams like Tonga and Japan will have the largest number of rest days,” he said.

He also noted that no match would start later than 19:45 local time, to maximise attendance and broadcast viewership in key markets.

In Pool C – dubbed the “Pool of Death” – 2003 champions England will open against Tonga, while three-times runners up France will begin their campaign against Argentina.

Twice champions Australia, runners up in 2015, will open Pool D play against Fiji, and Wales will take on Georgia.

In Pool B, Italy will play yet to be determined sides in its first two matches before meeting South Africa and New Zealand.

South Africa coach Allister Coetzee said the Springboks performance against New Zealand in their match last month, a thriller in which they lost by just a point, had given his players confidence.

“We are really excited to meet them first up, there is a great and proud rivalry between the Springboks and All Blacks and judging by past encounters between the two sides, this opening group match is bound to be another massive contest,” he said in a statement through SA Rugby.

Tickets will go on sale in phases starting Jan. 19, 2018, with some 1.8 million tickets expected to be available for the 48 matches.

“The ticketing strategy has been designed to encourage as many people as possible to attend,” the 2019 Rugby World Cup organising committee said.