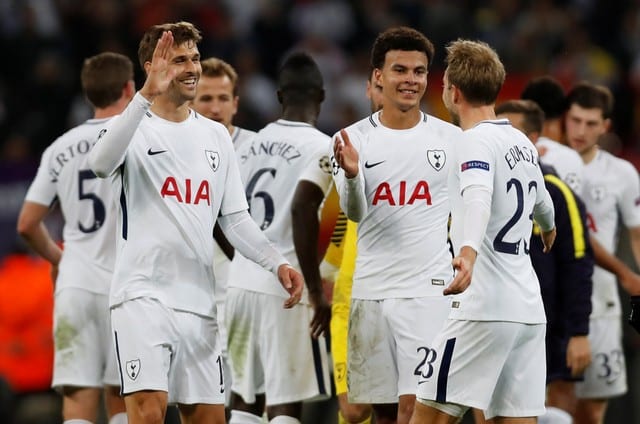 Tottenham Hotspur now belong with the best in Europe after their 3-1 demolition of Champions League holders Real Madrid at Wembley, manager Mauricio Pochettino said on Wednesday.

Two goals from Dele Alli and one from Christian Eriksen booked Tottenham’s place in the last 16 of the competition, having baled out in the group phase last season.

Twelve-times winners Real had been beaten only once in 22 European ties and had not lost any of their previous 30 group games, but could not live with Pochettino’s dynamic Spurs side.

“These games have made us more visible around Europe,” Pochettino, whose side gained a 1-1 draw in the Group H clash in the Bernabeu two weeks ago, told reporterse.

“We’ve qualified and we’re where we want to be. We’re in the next round of the Champions League.

“The most exciting thing – what motivates me the most – is that we keep going as a group and this club can achieve important things. You’ve seen today that Tottenham is a big team. We are starting to believe in our potential and that we can compete on a physical and mental level wit the top teams.

“We now belong with the best in England and Europe.”

Pochettino set his team up to attack a vulnerable Real side who have suffered their worst domestic start for five years.

It paid handsome dividends as they soared into a 3-0 lead midway through the second half before Christiano Ronaldo’s goal set up a nervy final 10 minutes.

Alli, suspended for Tottenham’s opening three games in the competition this season after being sent off againt Gent in the Europa League last season, was the pick of Tottenham’s players, although Kieran Trippier and Harry Kane ran him close.

“It was a fantastic display by us. We knew if we stuck to our gameplan and were solid at back then we’d get chances,” Alli said. “I wasn’t surprised we dominated. We don’t want to just compete with these teams we want to beat them.”

Pochettino said Alli, the first Englishman to score a brace against Real Madrid in the Champions League since Steven Gerrard for Liverpool in 2009, was getting back to his best after a relatively quiet start to the campaign.

“I think it was a great opportunity for Dele to show his quality,” Pochettino said. “It was a big motivation for him to play. He scored twice and nearly had a hat-trick.

“I’ve felt he is getting better and better every day. We need him at his best to achieve the things we want to achieve.”

Pochettino played down suggestions Wednesday’s result was his best in his three and a bit seasons in charge.

“Right now we are very proud of this match but it will mean nothing at the end of the season if we haven’t won a trophy,” he said. “I was just as happy when we beat Liverpool and Bournemouth. I’m relaxed and calm and now I’m just thinking about Crystal Palace on Sunday at midday.”

Real estate transactions up 21% in October, post-crisis peak in Limassol