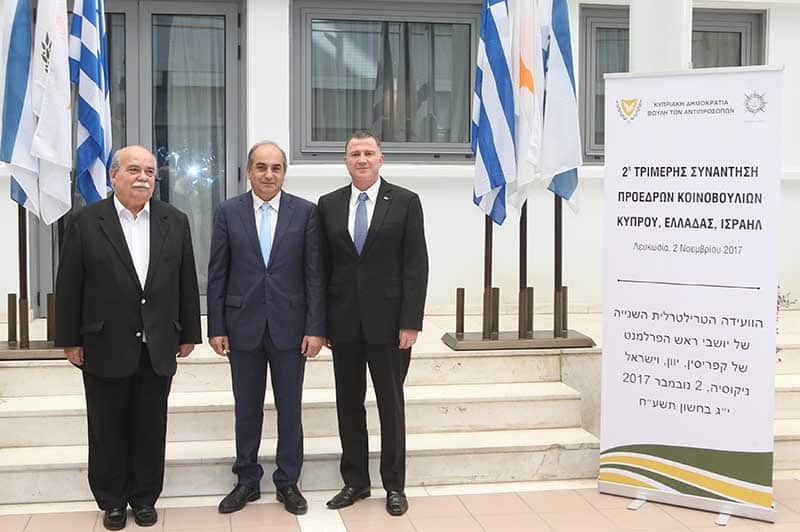 The second trilateral meeting between the heads of parliament of Cyprus, Greece and Israel on Thursday in Nicosia furthered work regarding matters of general cooperation, water resources and entrepreneurship, research, innovation and education, a joint declaration said, with the three agreeing to meet again in Greece next year.
According to the declaration, the three men stressed the high significance of water as a basic right and have underlined the will to contribute towards the implementation of the UN agenda 2030.
“We have also agreed to join efforts to elaborate a document of common principles on which each Parliament may base respective legislation on water resources,” the declaration said.
“The need for education and the creation of a water culture was particularly highlighted, as well as the shared goal to extend our cooperation in this field to other countries of the region.”
In the same vein, the three parliamentary leaders “emphasised the high significance of entrepreneurship, research, innovation and education, as a central driving force for the growth of our economies and further development of our societies”.
“Recognising the substantial contribution of investing in entrepreneurship, research and innovation to curb brain-drain, we have stressed our intention to further advance cooperation in these fields and encourage cooperation and exchanges in various disciplines and all levels of education,” the declaration pledged.
The three House presidents of Greece and Israel were in Cyprus for the second tripartite meeting of the heads of parliament of the three countries, following up from January’s inaugural meeting.
“Aware of its geostrategic role as a bridge between Europe and the Middle East, despite its small size, Cyprus has set the promotion of partnerships with friendly neighbours in areas of common interest as a strategic objective,” House President Demetris Syllouris said in a welcoming address.
“The tripartite partnerships of Cyprus and Greece, both with Israel and with Egypt, Jordan and Lebanon, evolving into a hub have extraordinary geopolitical and geostrategic significance,” he added.
“Co-operation between these countries must act as a tool for peace and stability”.
The three countries are working together on the EastMed and ΕuroAsia Interconnector projects, two infrastructural energy projects that are of interest to the EU.
Syllouris said the tripartite will also attempt to discuss specific actions, including the creation of a webpage on each parliament’s website with details of various aspects of the cooperation, as well a suggestion to the respective governments to appoint point-persons who can provide updates and guidance to the tripartite.
“In the field of water resources, we will examine the possibility of drafting a joint document of principles that will govern the legislative work of the three parliaments,” Syllouris said.
“We will also examine ways of raising awareness among the public on the need to conserve water. We will also discuss actions to promote cooperation in start-ups and academic exchanges, to the benefit of the young people of our countries.”
Participating in the meeting, hosted by the House of Representatives, in addition to Syllouris are President of the Greek Parliament Nikolaos Voutsis, and Speaker of the Knesset Yuli Yoel Edelstein, who is accompanied by the new President of the Israel-Cyprus Friendship Group in the Knesset Yaakov Margi.
Also taking part are Cypriot MPs Andreas Kafkalias, Angelos Votsis, Nikos Nouris, Dimitris Dimitriou, Michalis Giorgallas and Charalambos Theopemptou.
The tripartite meeting will deal with water resources, entrepreneurship, research, innovation, and education. Experts in their field have been invited to participate with presentations.
The meeting concluded at 1.15pm with the adoption and signing of a joint declaration, followed by statements to the press.
Security measures were strict in the morning, with the road in front of parliament, as well as the car park across the street, closed to the public.
The first tripartite meeting took place in January in Israel. On the agenda were parliamentary cooperation in the field of water resources, the relations of the three countries with the respective diaspora communities, combating fanaticism and intolerance, as well as issues related to commerce and education.
In his address, Voutsis said “this initiative is based on systematic work on an agenda relating to the broader region”.
“It is also based on the policy of our countries’ governments, which have built bridges in recent years,” he said.
“The more initiatives are undertaken between countries, religious leaders, social groups, cultural groups, the larger the web of relations created, which can guarantee a different fate for our peoples and the region as a whole.”
But despite the positive tone deliberately placed on the cooperation, Voutsis added, “we cannot ignore certain obstacles in its development”.
“At long last, everyone must work for peace, development and stability in the region,” he charged.
“With regard to Cyprus, we believe that a solution to the Cyprus problem should be mutually acceptable, fair and viable, based on United Nations resolutions and the acquis communautaire.”
Edelstein said “our three countries are democratic and are in a difficult region – we understand this”.
“Things which we fully understand, such as cooperation, opposition, elections, changes in leadership and governments, are not things simply or easily understood by our neighbours,” he said.
“These meetings are very important, given that this is a good action and aura among our various parliaments. We must utilise the good practices implemented in each parliament.”