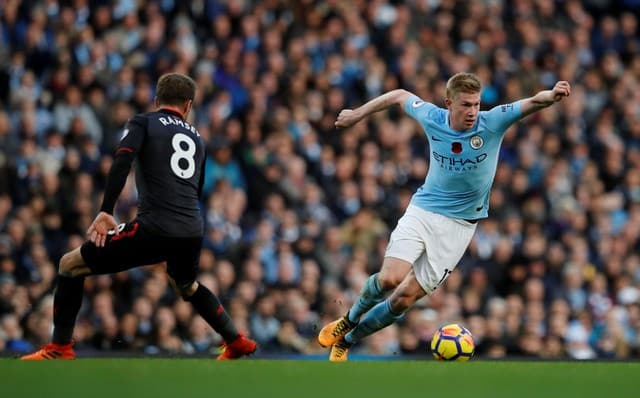 MANCHESTER CITY 3 ARSENAL 1
Premier League leaders Manchester City extended their club record run of wins to 15 in all competitions by beating Arsenal 3-1 on Sunday to open up an eight-point lead at the top of the table.

City grabbed the lead in the 19th minute through a low drive from Belgian midfielder Kevin De Bruyne and doubled their advantage soon after the interval when record scorer Sergio Aguero slotted home a penalty after Raheem Sterling was barged over by Nacho Monreal.

Arsenal threw on striker Alexandre Lacazette in the 56th minute and he fired them back into the game with a clinical diagonal finish after being set up by Aaron Ramsey.

But City restored their two goal lead when David Silva, in what replays suggested was an offside position, collected a pass from Fernandinho and slipped the ball to substitute Gabriel Jesus for a simple tap-in.

Mauricio Pochettino’s side, fresh from beating European champions Real Madrid in midweek, found Palace a difficult nut to crack at Wembley and could have been behind before Son curled in the winner midway through the second half.

Despite not being at their best, however, Tottenham remained in third position with 23 points having won five of their last six league games. They are behind Manchester United on goal difference before their clash at fourth-placed Chelsea later.

“No point in beating Real Madrid on Wednesday if you can’t win at home at the weekend,” Tottenham defender Eric Dier said.

“We knew it would be difficult today with players missing but we wanted to keep the momentum going.”

Palace have four points from 11 games but could count themselves unfortunate as Scott Dann was twice denied by Tottenham’s debutant keeper Paulo Gazzaniga while Wilfried Zaha wasted a great chance shortly before Spurs scored.

Gazzaniga also saved well from former Tottenham player Andros Townsend early in the second half while Son could have given a nervy Tottenham breathing space but dragged a good chance wide.

Tottenham were without Dele Alli, scorer of two goals in the 3-1 victory over Real, while keeper Hugo Lloris and his deputy Michel Vorm were both unable to start, handing a first appearance to Argentina’s Gazzaniga.

The 25-year-old grabbed his chance, making crucial saves to earn the man-of-the-match vote.

Tottenham dominated the first half without being able to break down a stubborn Palace side and they were grateful to Gazzaniga who saved well from Dann’s header.

The second half was more open and Palace grew in confidence after Townsend took advantage of a defensive mistake to force another great save from the home keeper.

Tottenham began to commit players forward and Zaha should have punished them when he was clean through but, after going round a poorly-positioned Gazzaniga, he shot wide with the goal at his mercy.

It proved a costly miss for Roy Hodgson’s side.

A few minutes later a clever Tottenham move ended up with Harry Kane playing in Danny Rose whose shot was blocked. The ball ended up with Son on the edge of a crowded area and he curled a delightful shot past Julian Speroni.

Son is now the leading Asian scorer in the Premier League with 20 goals.