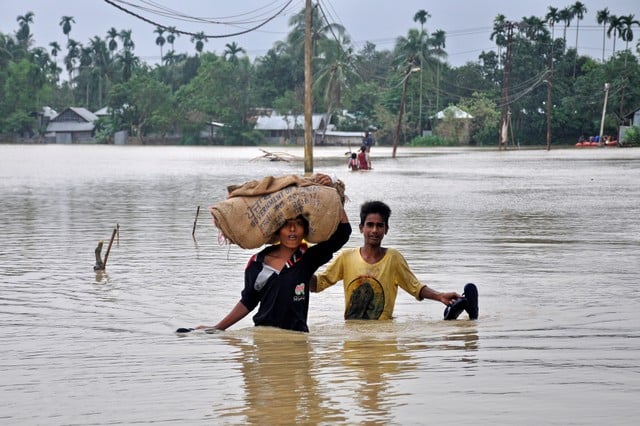 File photo: Boys wade through a flooded village on the outskirts of Agartala

This year will be among the three hottest on record, the United Nations said on Monday, as almost 200 countries started talks in Germany to bolster a global climateaccord that the United States plans to quit.

Temperatures this year will be slightly less than during a record-breaking 2016 and roughly level with 2015, the United Nations’ World Meteorological Organization (WMO) said, part of a long-term warming trend driven by greenhouse gases from burning fossil fuels.

“We have witnessed extraordinary weather,” said Petteri Talaas, head of the WMO, pointing to extreme events including a spate of hurricanes in the Atlantic and Caribbean, monsoon floods in Asia and drought in East Africa.

The WMO attributed the small dip from last year to the fading effects of a natural El Nino event that released extra heat from the Pacific Ocean in 2016. In terms of economic costs, 2017 will be the most costly hurricane season on record after Harvey, Irma and Maria, it added.

Delegates said sweltering temperatures and weather extremes were a spur for action at the annual conference in Bonn from Nov 6-17, which will work on a detailed rule book for the 2015 Paris climate agreement and try to step up action before 2020.

“This is our moment of truth,” Fiji’s Prime Minister Frank Bainimarama, presiding at the Bonn talks, told delegates, urging them to “lock arms with all other nations and move forward together”.

Patricia Espinosa, the UN’s climate chief, said “the very fabric of life on Earth is under threat” from rising temperatures. “The message cannot get any clearer. We must act right here, right now,” she said.

US President Donald Trump, who doubts mainstream scientific findings that man-made greenhouse gases are the primary cause of climate change, said in June he would pull out of the Paris agreement and instead promote US fossil fuels.

None of the speakers at the opening ceremony mentioned Trump by name. The meeting included a traditional Fijian warrior ceremony and children parading with models of a whale, jellyfish and polar bear to urge more action.

A UN list of delegates counts 48 Americans, mostly technical experts and many fewer than in recent years. The US delegation office in a tent village in Bonn has less space, for instance, than those for France or Italy.

A formal US pullout will take until November 2020 and delegates say there are wide uncertainties about how far Washington will balance Trump’s pro-coal agenda with the conference’s goals.

Fiji’s chief negotiator Nazhat Shameem Khan said the US delegation had consistently signalled “a willingness for constructive engagement” in preparations for the Bonn conference.

And some developing nations, including Iran, said all rich countries were failing to do enough, especially to cut emissions before 2020.

The Paris climate agreement sets a goal of ending the fossil fuel era this century and to limit warming to “well below” two degrees Celsius (3.6 Fahrenheit) above pre-industrial times, ideally 1.5C.

But the United Nations says the world is on track for a temperature rise of about three degrees by 2100.

Monday’s WMO report said average surface temperatures in 2017 were already about 1.1C above the pre-industrial era in data from January to September.

Delve into the moody past at film festival

Dustin Hoffman’s first appearance after allegations against him