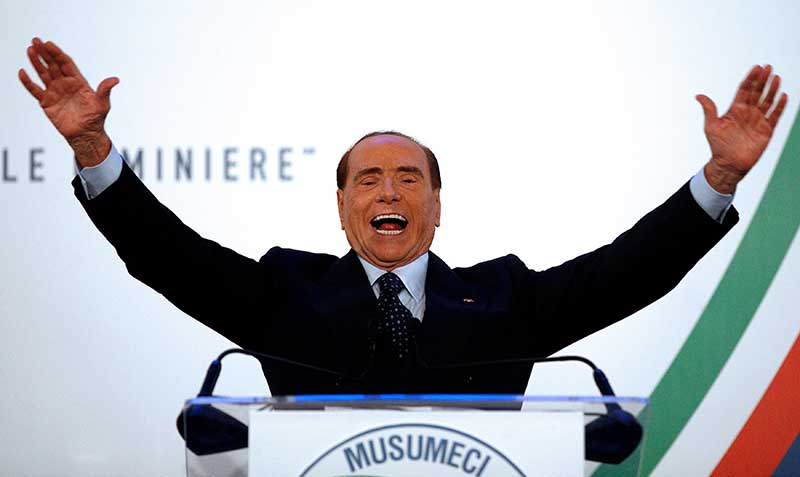 In a post-Harvey Weinstein world, logic would dictate that Silvio Berlusconi, who hosted wild parties with young women and brags about his sexual prowess, would not have a ghost of a chance at political resurrection.

But logic and Italian politics have never been synonymous.

On Monday, the four-time former prime minister’s right-wing bloc relished a huge political victory in regional elections in Sicily. Silvio, as his die-hard adoring acolytes simply call him, was back in the driver’s seat.

“Berlusconi is Alive,” was the headline in La Verita, a right-wing newspaper, on Tuesday.

The mainstream Corriere della Sera ran a cartoon showing Berlusconi, wrapped in a burial shroud, emerging from a tomb like Lazarus in the New Testament.

The regional Sicilian ballot, in which Berlusconi’s candidate, Nello Musumeci, won big, was seen as a dry run for nationwide elections due before May.

As the 81-year-old media tycoon campaigned tirelessly for Musumeci, betting that a victory in Sicily would be the springboard for a national return to power of the centre-right, the ex-premier’s sex scandals were no issue.

“Unfortunately, this is a country where if one violates rules on sexual ethics, he is admired,” said Anna Foa, a history professor who is on a team of women who write a monthly edition on women’s issues of the Vatican newspaper L’Osservatore Romano.

“This is a country – and I am sorry to have to say this – where breaking the rules brings votes,” Foa said. “Everyone wants to be the one who breaks the rules and gets away with it, and Berlusconi did this in a sphere that people like best – the sexual sphere.”

“Bunga Bunga” – the term of uncertain origin that the billionaire media magnate gave to his wild parties with young women at his plush residence near Milan – is now part of the modern Italian lexicon.

Partly as a result of the sex scandals, Berlusconi went through a very public divorce from his second wife, Veronica Lario, in 2014. His current partner, Francesca Pascale, is 49 years his junior.

Berlusconi is due to stand trial on charges he bribed witnesses to silence them over accusations he paid for sex with young women. In an earlier, related case, he was acquitted of having sex with one when she was still 17. He denies all wrongdoing.

But far from being a hindrance, commentators say that in Italian politics, scandals can help, if only because voters believe there is little left to hide.

“Berlusconi is like a used car that comes with a guarantee. You know what you are going to get,” said Giovanni Orsina, professor of modern history at Rome’s Luiss University.

“Even a person who is 81 years old and has gone through all these issues and scandals can seem appealing…, not because of his own strength but because of the weaknesses of others.”

For now, Berlusconi cannot run for office due to a 2013 tax fraud conviction. But he hopes the European Court of Human Rights overturns this ban in time for him to run next year.

Even if the courts deny him the chance, he would still be calling the shots as leader of the centre-right in the event of a victory at the national elections.

More than 50 women have accused Hollywood mogul Harvey Weinstein of having sexually harassed or assaulted them over the past three decades. He has denied having non-consensual sex with anyone.

The allegations against Weinstein have prompted many more women as well as men to share stories in the media about improper behaviour by powerful men in their countries.

Not so in Italy, where women have for the most part remained silent despite confidential polls showing that many were asked for sexual favours in order to keep their jobs or advance their careers.

“We are still a backwards country where women who speak out about sexual abuse are accused of exaggerating,” said Michela Marzano, an Italian philosopher who teaches at Paris Descartes University.

“There is an unconscious adoption of the concept of a patriarchal order and male superiority and there is very little solidarity among women.”