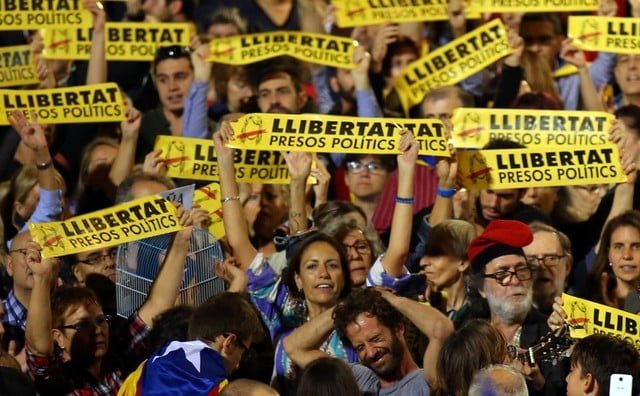 People hold banners reading "Freedom Political Prisoners" during a gathering in support of the members of the dismissed Catalan cabinet, outside Barcelona's town hall

Catalonia’s deposed leader Carles Puigdemont on Tuesday urged the region’s political forces to unite against Spain, as hours remained for him to agree terms for an electoral pact with other pro-independence parties.

Puigdemont went into self-imposed exile in Belgium last month after Spain’s central government fired his secessionist administration, dissolved the Catalan parliament and called an election in the region for Dec 21.

Madrid also issued an arrest warrant against him on charges including rebellion, but a Brussels court ruled on Monday he could remain at liberty in Belgium until it had decided whether he should be extradited.

The independence push has deeply divided the country, dragging it into its worst political crisis since its return to democracy four decades ago and fuelling anti-Spanish feelings in Catalonia and nationalist tendencies elsewhere.

Pro-independence parties want the December vote to become a de facto independence referendum, and Puigdemont’s PDeCAT and the ERC party led by Oriol Junqueras said at the weekend they might contest it on a combined ticket.

But they must register any alliance by the end of Tuesday, and prospects of them bridging their differences in time looked slim.

ERC’s spokesman Sergi Sabria said on Monday his party did not rule out a coalition with PDeCAT, but would agree only if other parties joined them, including the anti-capitalist CUP which has yet to decide whether it will contest the December ballot.

Polls suggest secessionist parties would win enough votes combined to hold a slim majority in the Catalan parliament. Running together would increase their chance of success.

Puigdemont and other secessionist leaders face charges of rebellion, sedition, misuse of public funds, disobedience and breach of public trust for organising an illegal independence referendum on Oct 1 and later proclaiming a Catalan republic, something that goes against Spain’s constitution.

In an interview with Catalunya Radio on Tuesday, Puigdemont said all parties standing in the region should unite against Madrid’s actions.

He also called on the Spanish government to suspend article 155, which Prime Minister Mariano Rajoy enacted last month to rule Catalonia directly from Madrid, ahead of the December vote.

“The ideal would be a broad regional list of parties… PDeCAT, CUP, (left-wing) Podemos, ERC… that stand for democracy and freedom.” Puigdemont said.

Around 200 Catalan mayors who are in favour of independence travelled to Brussels on Tuesday to back Puigdemont and defend the Catalan cause in the European capital. They were due to hold a rally at 5pm (1600 GMT).

New board game challenges your ability to rap