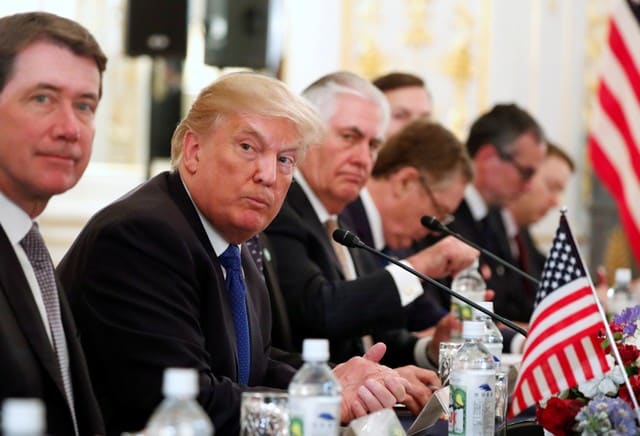 OVER the next few days, Donald Trump will be visiting the leaders of Japan, South Korea and China, and the same topic will dominate all three conversations: North Korea. Japan’s Prime Minister Shinzo Abe and South Korea’s President Moon Jae-in will be looking for reassurance that the United States will protect them from North Korea’s nuclear weapons, but in Beijing Trump will be the supplicant.

The American president will be asking President Xi Jinping to do something, ANYTHING, to make North Korea to stop testing nuclear weapons and intercontinental ballistic missiles  Trump has painted himself into a corner with his tongue, but even he knows (or at least has been told many times by his military advisers) that there is no military solution to this problem that does not involve a major war, and probably a local nuclear war.

Trump promised that North Korea would never be able to strike the United States with nuclear weapons, and the reality is that it will get there quite soon (if it is not already there). The United States has no leverage over North Korea except the threat of war, so he needs China to get him off the hook.

China has lots of leverage: 90 percent of North Korea’s imports come in through China, and most of its foreign exchange comes from selling things to China. Beijing could leave the North Korean population freezing and starving in the dark if it chose – but it won’t do that.

Xi Jinping does not love Kim, and he definitely doesn’t like what he has been doing with the nuclear and missile tests. Kim has even purged the senior people in the North Korean hierarchy who were closest to China, and Beijing still puts up with his behaviour. Why?

Almost all the world’s ruling Communist parties have been overthrown in in the past quarter-century. What’s left, apart from the Chinese Communist Party (CCP), is just a few odds and ends: North Korea, Cuba, Vietnam and Laos. And the CCP’s highest priority is not “making China great again” or building a blue-water navy or whatever; it is protecting the power of the Party.

The Chinese leadership cares about those things too, but everything is always seen through the prism of “Will it strengthen the Party’s rule?” Seen through that prism, the collapse of the North Korean Communist regime is a potentially mortal threat to the CCP as well.

Beijing doesn’t stay awake at night worrying that a reunited Korea would bring American troops right up to the Chinese border either. It’s actually more likely that US troops would eventually leave a reunified Korea. After all, nobody in Korea worries about a Chinese attack, so why would the US troops stay?

What truly frightens the men in charge in China is seeing another Communist regime go down. They were terrified by the collapse of the Soviet regime in 1989-91, and they blame it on the weakness and willingness to compromise of the Soviet Communist Party.

For all their power and all their achievements, they see themselves as standing with their backs to a cliff. One step backward, one show of weakness, and they could be over the edge and in free-fall. Letting Kim Jong-un fall, however much they dislike him, might unleash the whirlwind at home.

That is probably not true, but it has been the view of the dominant group in the Chinese Communist Party ever since the Soviet Union fell. They will not push Kim too hard no matter what the cost. And the US Joint Chiefs of Staff have just told Congress that there is no way the US can eliminate North Korea’s nuclear weapons without a full-scale land invasion.

Conclusion? No matter what the various players say now, in the end North Korea will get to keep a modest nuclear deterrent force, but it will have to agree to keep it small enough that it could not possibly launch a successful first strike. Not that it could even remotely afford to build a force big enough to do that anyway.

Two children killed after car crashes in to Australian classroom