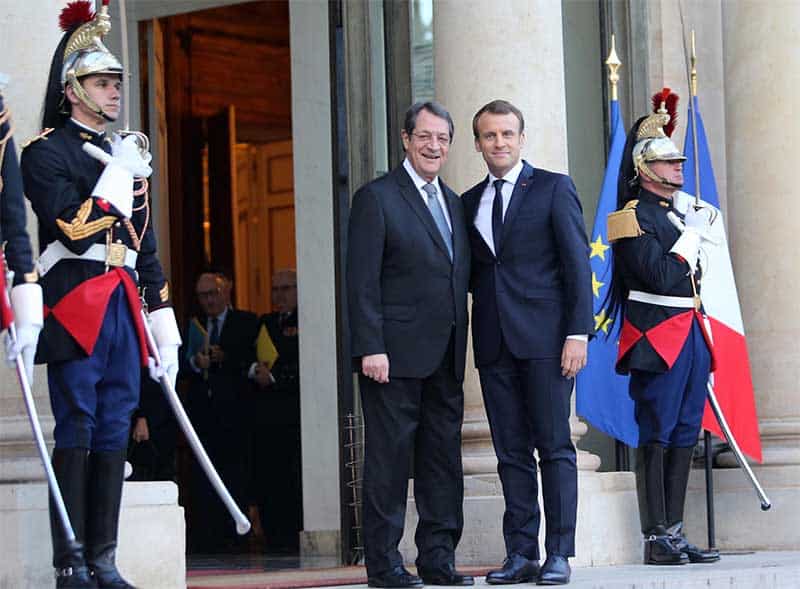 Anastasiades and Macron in France on Monday

Cyprus and France appear to be upping ties in the area of defence as high-ranking officials of the French defence ministry are due in Cyprus in the coming days to visit the naval base at Mari as part of moves to strengthen cooperation.

And, within the framework of the new security architecture being discussed in the EU, the island was seen as a member state which maintained excellent relations with its neighbouring countries. This was especially important in the Eastern Mediterranean, he added.

“We could say the visit of the president was a milestone in relations between the Republic of France and Cyprus,” the spokesman said.

Referring to the visit to the Mari base by high-ranking French officials, the spokesman said there were plans to upgrade “something” at the base “where France sees added value”. He did not elaborate.

Asked if France would also be provided facilities at Mari, and the Andreas Papandreou air base in Paphos, the spokesman said: “and not only, but also other facilities as regards cooperation within the framework of upgrading our naval base.”

Anastasiades said on Monday after meeting Macron, that both countries wanted to intensify their dialogue for the implementation of the France-Cyprus Strategic Agenda which was agreed and signed in October 2016.

Macron also referred to “very close ties” in the defence sector. He said last year, the French navy visited Cyprus more than 40 times. He also suggested the modernisation of the Mari base would help strengthen cooperation.

France and Germany have long harboured a desire to deepen European military cooperation, especially following the Brexit vote last year given that the UK was not on board with the idea. Paris and Berlin, Europe’s two remaining military powers, have made a detailed list of proposals including a joint and permanent EU command headquarters for its civilian and military missions. A joint paper floats the idea of setting up joint land, air and sea transport capabilities to complement the bloc’s missions and enhancing common training among officers across the 27 states.

Christodoulides on Tuesday suggested the three main issues that were discussed between Anastasiades and Macron – defence, energy and security – were interconnected.

He referred to Paris’ strong support for the French company Total, which has ongoing activities in Cyprus’ Exclusive Economic Zone (EEZ) and for its future plans which it would soon begin to implement.

Asked whether Turkish provocations in and around the island’s EEZ were discussed at the Anastasiades-Macron meeting, Christodoulides said the French president’s reference to Paris’ strong support for Total’s activities in Cyprus was a vote of confidence in the island.

Whether France was ready to defend the company’s operations, the spokesman said the response to those challenges was that energy plans were not only being implemented, but being strengthened “and this is the best response to Turkey and to all those who could question this sovereign right of ours”.

And, as far as the Cyprus issue was concerned, he added that France was a member of the EU and a permanent member of the Security Council, and that Macron had been clear that he would like to see a more significant contribution to efforts to reach a solution.

“There is a clear commitment on behalf of France for a more substantive and more active involvement in the Cyprus issue,” he said.

A solution of the Cyprus problem must strengthen Cyprus’ role as a security provider in the region, he said, adding that this role must not be hindered by any provisions in the solution.

On EU-Turkey relations, Christodoulides said Ankara’s role in some fields, including the refugee crisis, was important but noted that this did not mean to imply that Turkey should not fulfil its EU obligations towards all EU member states, including Cyprus.