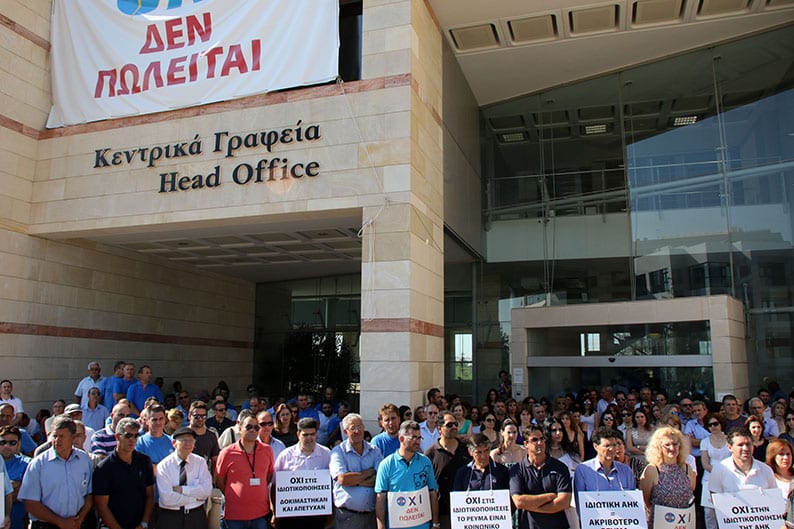 Unions at the state power company EAC on Monday appeared still poised to go through with an announced two-hour strike for later this week, amid fresh pleas from the government to put off the industrial action.

The unions have announced that a first strike will be taking place this Thursday between 7am and 9am, followed by a 24-hour action a week later if their demands are not met in the meantime.

Electricity production is not expected to be affected during the two hours, though customer service outlets will remain shut.

Despite ongoing behind-the-scenes talks aimed at averting the strike action, EAC spokesperson Christina Papadopoulou told the Cyprus Mail that as of Monday afternoon nothing new had come up and that it seemed the strike this Thursday would go ahead as scheduled.

Both President Nicos Anastasiades and energy minister Giorgos Lakkotrypis are currently abroad – although reports said that in their absence the presidential palace issued a new appeal to the EAC unions to hold off their action until the two sides can hammer out a compromise deal.

The syndicates are up in arms over a government bill that would change the landscape in the energy market, over which the EAC currently holds a monopoly.

The bill would grant the Transmission System Operator (TSO) full autonomy from the semi-state power company, as part of a road map for opening up the electricity market to private producers by July 2019.

Unions see this as the opening salvo to weakening and dismantling the EAC.

The government is seeking to render the TSO – which monitors transmission and production – a fully autonomous agency.

Currently the TSO is fully dependent on seconded staff from the EAC.

The TSO argues this needs to change, as seconded EAC technicians cannot possibly be given access to electricity competitors’ proprietary data.

Last week the EAC unions delivered to the energy ministry a lengthy report detailing a proposal whereby the TSO would remain under the EAC’s structure. At the same time they propose the creation of an entirely new and independent agency – dubbed the Electricity Market Operator.

They want assurances that this agency will be operational for at least one year, after which its existence would be re-assessed.

According to reports, in a counter-proposal, the government agreed to the Electricity Market Operator but insisted the TSO must become fully autonomous from the EAC as of the first day of the operation of an open market.

The government pitch also included a caveat, where the matter of the TSO’s status is to be re-examined six months prior to the date mooted for full electricity liberalisation.

For the moment the administration is sticking to its guns on the timeframe that it envisages for the TSO to gain full autonomy.

Should the government cave in on this point, the upshot would likely be the derailment of the tight schedule which the government has in mind for opening the energy market to competition.

It’s been moreover suggested that any uncertainty over the TSO’s future status will discourage private players from preparing to enter the market.

The EAC unions further demand the opening up of vacated positions. The government has reportedly promised to fill some 80 to 90 positions and to fast-track this to parliament.

It’s also understood that, in a bid to placate the syndicates, the government has given assurances that it will not block the EAC’s plans to build a 20 Megawatt solar park in Akrotiri, close to the British base’s airport.