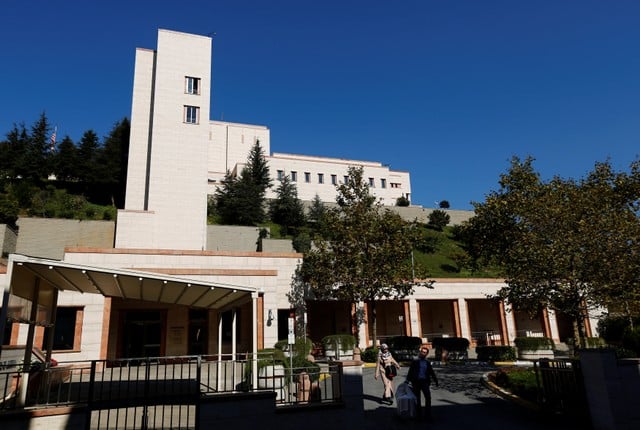 File photo: US Consulate is pictured in Istanbul

“The limited reissuing of visas between the United States and Turkey… prior to our visit can be seen as a positive development,” Yildirim told reporters before leaving for the United States, where he is due to meet US Vice President Mike Pence.

The United States said on Monday it would resume “limited visa services” in Turkey after getting what it said were assurances about the safety of its local staff. Washington halted issuing visas at its missions in Turkey last month, citing the detention of two local employees.

Turkey said it would match the move, relaxing a visa ban of its own that was instituted last month in retaliation against Washington. However, Yildirim reiterated Turkey’s stance that it had not offered assurances to Washington.

“Both countries are states of law, and procedures are being carried out in accordance with the law. Negotiations regarding the offering of assurances to the United States or vice-versa would breach the principles of laws of state,” he said.

In May, a translator at the US consulate in the southern province of Adana was arrested and, more recently, a US Drug Enforcement Administration (DEA) worker was detained in Istanbul. Both are accused of links to last year’s coup attempt. The US embassy has said the accusations are baseless.

Turkey has been angered by what it sees as US reluctance to hand over the cleric Fethullah Gulen, who has lived in Pennsylvania since 1999 and whom Ankara blames for orchestrating the coup. US officials have said courts require sufficient evidence to order his extradition.

Yildirim said Gulen’s extradition would be discussed during his visit, as well as the fate of some Turkish citizens arrested in the United States – a reference to the wealthy gold trader who was arrested over Iran sanctions evasion last year and an executive at a state-owned bank arrested this year.

“We have strong evidence that Gulen was behind the July 15 coup attempt and we want his extradition. We want the concerns we have regarding the cases of our citizens arrested in the United States to be eased,” Yildirim said.

“They also have similar requests, and diplomatic channels are being used for discussions, we are both seeking a way out.”

Enviromental migrants on the rise