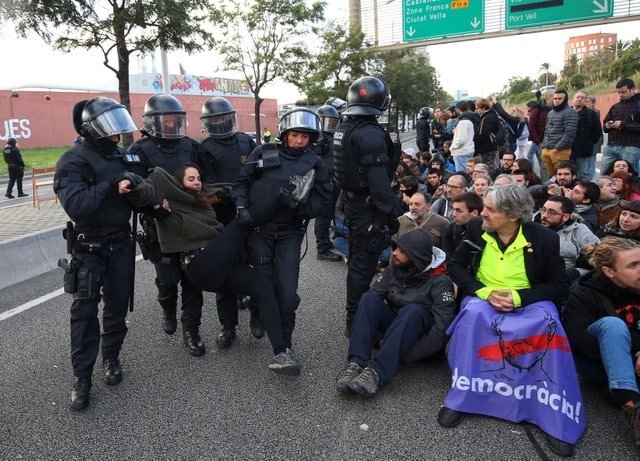 A strike called across Catalonia by pro-independence activists to protest the jailing of sacked regional politicians shut down roads early on Wednesday, causing huge tailbacks into Barcelona while some public transport ran minimum services.

Scores of people stood across dozens of major highways in the region waving placards and chanting “freedom for political prisoners” while minor scuffles were reported on social media as police attempted to move protesters, TV and video images showed.

One crowd of activists also forced their way into the train station in the city of Girona and protested on the tracks, causing delays, images on social media showed.

However, despite transport delays, shops and businesses in the region largely appeared to be functioning as normal.

The leaders the ANC and Omnium and eight former members of the Catalan government are in prison awaiting trial after staging a referendum on secession that Spanish courts deemed illegal and then declaring independence.

The independence drive has tipped Spain in to its worst political crisis in decades, widening political and cultural divisions and prompting thousands of companies to relocate out of the region.

The government, which assumed control of Catalonia after a unilateral independence declaration, has called an election for Dec 21.

New shipping under-secretariat to be based in Limassol, cabinet decides