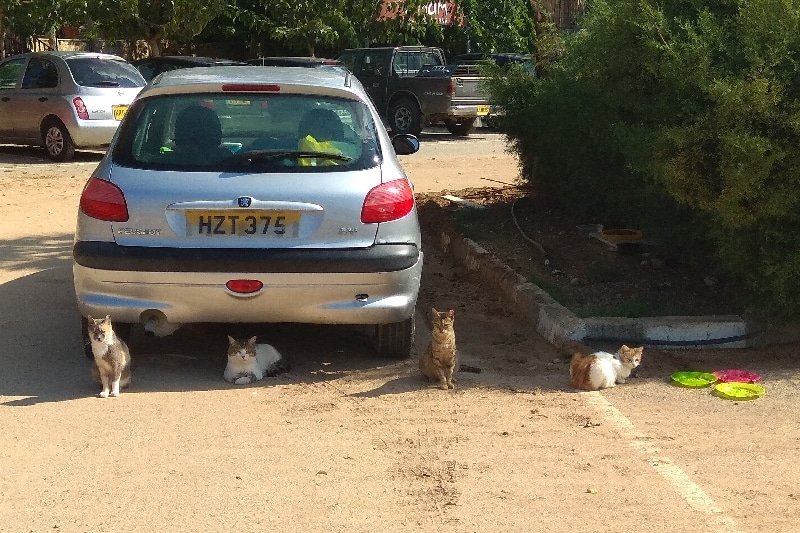 A British holidaymaker has started a fundraising page to help a Paphos cat lover raise much needed funds for her animal welfare work.

Jay Swann, a 31 year old GP from Edinburgh, is on her first trip to Cyprus and told the Cyprus Mail that she was so moved after meeting 73-year-old Gaynor Georgiou, affectionately known as the ‘cat lady’ of Paphos, that she wanted to do something to help.

“Her plight and a lifetime of selfless work greatly touched me and I set up a Go Fund Me page to raise money to help her feed and care for the stray cats of Paphos,” Swann said.

The GP has grown up with cats and lives with two rescues. After reading about Georgiou in the Cyprus Mail, Swann and her partner Matthew found Georgiou on her daily feeding rounds in Paphos old town on Monday and handed over some cat food.

Georgiou said: “It’s wonderful that they came and found me, and also that they are helping to raise funds to feed the cats, I am really desperate and I have been struggling this year, even two euros will help.”
Swann said that although the pair gave Georgiou a small donation, some tins and a bag of dry food, they realised that far more needs to be done.

Georgiou spends hundreds of euros of her own money on the cats but is reliant on donations for the animals – she looks after around 160 cats, which amounts to at least 20kg of food every three days. She has been doing this for the last 27 years.

The GP’s initial goal is to raise £250 but she said she is also concerned as Georgiou also needs some real long term help.

When possible, the 73-year-old catches the stray cats and kittens and takes them to Paphiakos and CCP animal welfare charity’s free spaying and neutering programme.

Georgiou’s task has been made more difficult as people have started to dump unwanted cats and kittens at one of her popular feeding areas.

“They are dumping their unwanted pets, many have already been spayed and are very friendly, it’s really sad,” she said.

Georgiou said the cats are her life and apart from them, she only has a sister, who is in a coma in the UK. She recently managed to get four friends to feed the cats so she could take a short trip to the UK to visit her sister in hospital.

“This has been a terrible year for me and I only have my cats. They have taken possession of me and I would never walk away from them, but I really do need some help.”

Our View: Exam leak been blown out of proportion