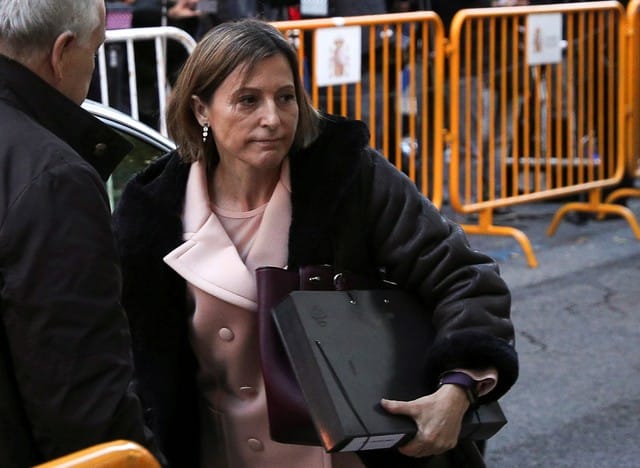 Carme Forcadell, Speaker of the Catalan parliament, arrives to Spain's Supreme Court before she was remanded in custody pending payment of a €150,000 bail, in Madrid

The Catalan parliament’s speaker was released from prison on Friday but the terms she agreed to seem likely to prevent her campaigning on a pro-independence ticket in a regional election next month.

Carme Forcadell appeared in the Supreme Court in Madrid on Thursday to answer charges of rebellion, sedition and misuse of public funds, after she enabled a declaration of independence by the Catalan parliament in late October that prompted the Spanish government to take control of the region.

She was released on bail of 150,000 euros after agreeing to renounce any political activity that went against the Spanish constitution, according to the court’s ruling.

Those terms threaten to further undermine an independence movement in which cracks are starting to appear.

Court sources had quoted Forcadell and other summoned Catalan lawmakers as telling the judge that the independence declaration had not been legally binding – comments that the Spanish government welcomed on Friday.

“We see … in the statements from the separatist leaders how the return to a constitutional order is starting to become a reality,” Spanish government spokesman Inigo Mendez de Vigo told reporters.

Judge Pablo Llarena said the court could reconsider its ruling if it found evidence of Forcadell offending again, in effect banning her from campaigning for independence in the Dec. 21 election.

Puigdemont at the time called the declaration a major step towards establishing an independent Catalan state, and Forcadell described Rajoy’s response as a coup and an “attack against democracy”.

On Tuesday, the PDeCAT party of Puigdemont — who flew to Brussels after being deposed — failed to agree on a united ticket to contest the election with another secessionist party, denting the pro-independence camp’s hopes of pressing ahead with its bid to split from Spain after the election.

In a last-ditch attempt at a united front, Puigdemont said on Friday he was still willing to lead an independent civic group, but none of the parties immediately offered it any backing.

Forcadell left the Alcala Meco prison outside Madrid after the Supreme Court said in a statement it had received her bail payment.

Forcadell tweeted: “We’re returning home. With the calm knowledge of having acted correctly: guaranteeing freedom of expression in the parliament, the centre of national sovereignty.”

Authorities are continuing to investigate her role in Catalonia‘s banned independence drive, and the court confiscated her passport and ordered her to report to authorities once a week.

The court had summoned her along with five Catalan lawmakers, four of whom were released on Thursday on 25,000-euro bail after surrendering their passports. The fifth was released without bail or conditions.

Eight former members of the Catalan government and the leaders of the two main pro-independence grassroots groups remain in prison pending a separate investigation by the High Court.

Puigdemont, who also faces charges of rebellion and sedition, is appealing in Belgium against an international arrest warrant served by Spain.