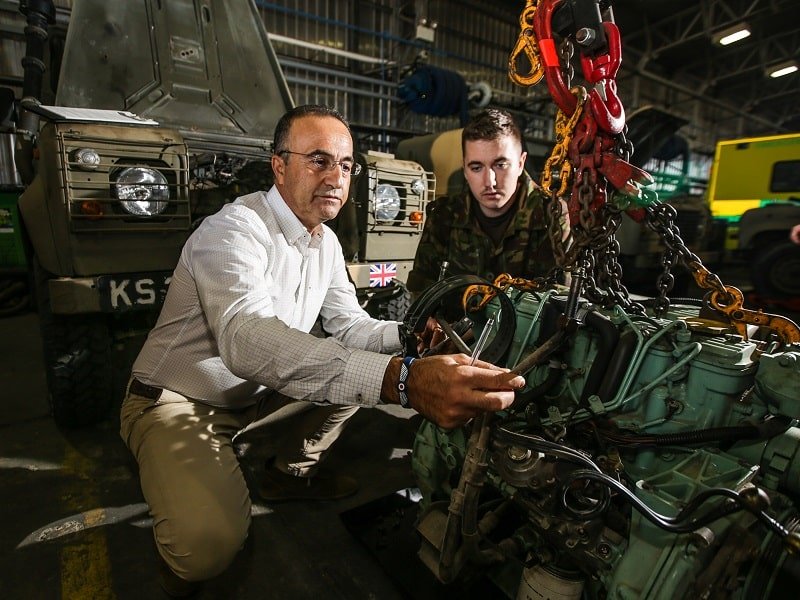 Cypriot mechanical engineer Nikos Akamas was one of the recipients of commendations awarded on Tuesday by the commander of the British bases in Cyprus for his outstanding service over the past 20 years, the British bases said in a statement.

The 52 year old, who is in charge of maintenance, budgets and servicing of vehicles and equipment within British Forces Cyprus – among many other things – found out he was to be awarded the commendation only last month and it came as quite a shock when he heard the news.

After being called into his line manager’s office, he also admitted to feeling a little apprehensive at first.

He explained: “When I was called in to see my boss I did wonder what was going on so I was a little bit worried but when I got there it soon became clear that it was good news.

“He shook my hand and congratulated me and said I was receiving a commendation which was a big surprise for me.

“It is an absolute privilege to be part of the event and to receive this award. I was obviously very happy to hear the news.”

After finishing his master’s degree in Australia, where he lived for a combined total of 15 years on two separate occasions, he admitted working on the Bases was always an ambition of his.

That was realised three years after he returned from Australia, when in 1997 he began working for a contractor at the time which recognised his professional qualities.

He continued: “Working for British Forces Cyprus was something I wanted to do because they were and still are a very good employer.

“I know that in this working environment you can prove yourself and if you are able to do that, then your talents will be rewarded.

“My working environment and the people I am working with are all very professional. The structures that are in place, the procedures and the overall mentality is excellent and I love working here.”

The Limassol resident, who is married with two children, has had his skills rewarded over the years with promotions and as the senior locally employed civilian with 80 other LECs working under him, it is right that BFC has acknowledged the service he has provided over the past two decades.

The ceremony, which took place at Flagstaff House – the home of Commander British Forces Cyprus, Major General James Illingworth – in Episkopi, also saw another 15 commendations awarded to members of staff, both civilian and military.

Almost 40 members of the SBA Police were also awarded Chief Constable Commendations for their outstanding service to the SBAs and three members of the force also received Constable of the Year awards.

India to spray capital with water amid deepening smog emergency

Irish playwright comes to the end of her eggs