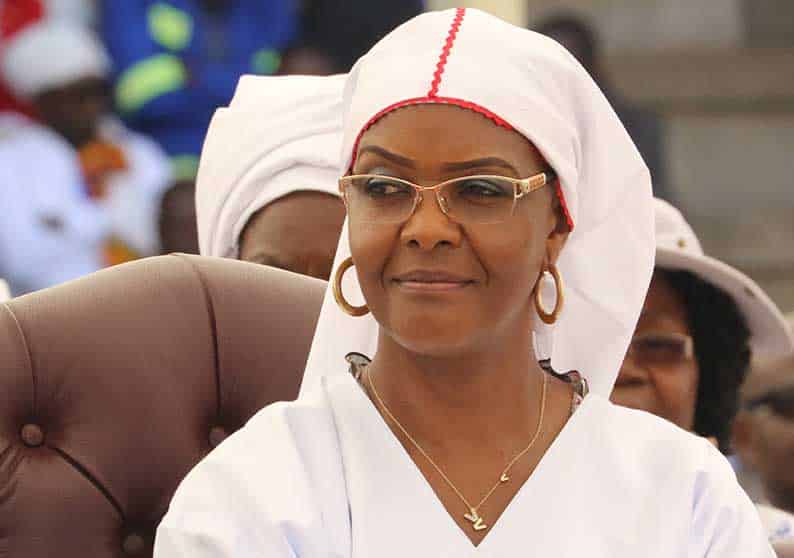 Grace Mugabe, second wife of Zimbabwe’s President Robert Mugabe, had a moment of awful clarity about her future three years ago. Speaking about Joice Mujuru, the woman who was then vice-president and the elderly president’s likely successor, she said: “She has been telling people that once Mugabe is gone…she will drag me in the streets, with people laughing while my flesh sticks to the tarmac.”

It’s doubtful that Mujuru said any such thing, but it was very revealing about Grace Mugabe’s fears. So she had a word with her husband, and Joice Mujuru was no longer vice-president. She was replaced by Emmerson Mnangagwa, who served as Mugabe’s special assistant during the liberation war of the 1970s and had been close to him ever since.

Mnangagwa survived an attempted poisoning in August, but now he is gone too. People began to see him as the heir apparent, so on Sunday Grace Mugabe told a rally in Harare “The snake must be hit on the head. We must deal with the real snake behind the factions and discord in the party.”

On Monday, Mnangagwa was fired in an official statement that accused him of “traits of disloyalty”. It was almost verbatim the same statement that was issued when Joice Mujuru was dismissed in 2014 – and it is expected that Grace Mugabe will be appointed vice-president herself at a special congress of the ruling Zanu-PF party next month.

It looks like ambition run amok, but it’s actually more complicated than that. She is rich and powerful at the moment, but as Zimbabwean journalist Andy Moyse pointed out a couple of years ago: “She’s going to be terribly exposed once (Robert Mugabe) is gone because there’s no political structure to save her. She’s trying to entrench her position and her assets.”

Grace Marufu was a 20-year-old typist at State House in Harare when Robert Mugabe, 44 years her senior, started to take an interest in her. She was already married to her childhood sweetheart, an air force pilot, but one thing led to another and she had her first child with Mugabe as his wife lay dying of kidney failure. She later divorced her husband, and in 1996 she became Zimbabwe’s ‘First Lady’ by marrying Mugabe.

For the next 18 years she took no visible interest in politics, but her frequent and expensive shopping trips abroad – she allegedly once spent $120,000 in a single day in Paris, and she was spotted in the business class lounge at Singapore airport with fifteen trolleys full of purchases – made her deeply unpopular with the Zimbabwean public. She was known as the ‘First Shopper’, or ‘Gucci Grace’, or just ‘DisGrace’.

And then, three years ago, everything changed. It was probably just Mugabe’s advancing age that made her realise how vulnerable she would be after he died: he’s in pretty good shape for 93, but he clearly isn’t going to be around much longer. So she suddenly plunged into politics.

She had her husband make her the head of the powerful women’s league of the ruling Zanu-PF party, she was awarded a PhD in sociology by the University of Zimbabwe in the record time of two months (no thesis has ever surfaced), and Dr. Grace Mugabe started travelling around the country holding rallies that became known as the ‘Graceland Tour’.

All the senior members of Zanu-PF are quite rich, but she is probably the richest of all, so she has resources to buy allies. She has the Old Man wrapped around her finger, and he holds absolute power for as long as he stays alive and alert. In only three years she has shoved aside all the other contenders for the succession.

“They say I want to be president,” she said. “Why not? Am I not Zimbabwean?” And president she will be after Robert Mugabe dies – at least for a week or two. But she has made a lot of enemies in the party, and she has no real popular support.

She will probably have a couple of years to build a political machine of her own, because Mugabe is planning to run for president again next year, and will of course win. But he would be 99 years old when his next term expires, and he is likely to expire himself well before that.

Grace Mugabe is literally a bare-knuckle fighter. In 2002 she beat up a journalist who offended her using a “knuckle-duster of diamond rings”, as one report put it. Just this September she assaulted a young South African “model” whom she caught visiting her grown sons, who are both living the high life in Johannesburg. She won’t go down easily – but she almost certainly will go down.

It was not Grace Mugabe who turned Zimbabwe into an economic wreck so extreme that most people’s main source of income is remittances from the fifth of the Zimbabwean population that has fled to South Africa or Botswana. Her husband is really to blame for this human disaster, but her extravagant spending makes her a target for the resentment too.

Once he dies, she will be lucky to get out alive.

Hysteria over Islamic terror in US is misplaced