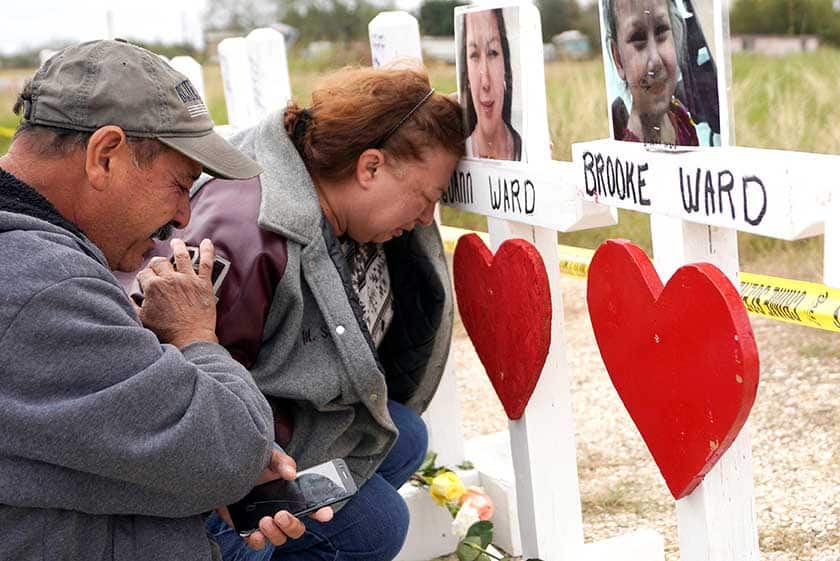 On Sunday, November 5, a lone white man entered a church and killed 26 worshippers. The shooter was described by US President Trump as “deranged”. Locally, authorities labelled it the worst mass shooting in modern Texas history.

On October 31, another attack by a lone Uzbek immigrant associated with Islamic links left eight people dead and many others injured. The response from the authorities was clear: that the perpetrator had planned the violence beforehand; and that it constituted the worst act of terror since the 9/11 (September 11, 2001) al Qaeda attacks which led to 2,993 fatalities. President Trump was quick to react by calling the criminal justice system “a joke” and a “laughing stock”. He promised appropriate punishment for “these animals” and the introduction of immigration controls. He then tweeted that the perpetrator of the “horrible crime” should get the “death penalty”.

Terror is terror whether it is related to “mental health”, or “mass killing”, or “domestic” shooting or “externally” guided political aims. Any person with a conscience will not justify the loss of life and the injuries it inflicts on often totally innocent people going about their business. But reflecting on acts of atrocity, not every killing, mass killing or crime are judged and responded to in the same way.

Let us consider another atrocity: an outdoor music festival descends into a blood-bath and chaos when a lone, white American gunman (without links to Islamists) aims at defenceless participants and kills 58 of them as they run for cover and injures well over 500 others. This was the Las Vegas mass shooting on Sunday, October 1, which was described as the deadliest in modern US history. In contrast to the October 31 terror attack, the response from the US president, when asked about arms control, was that it was not the time for such a consideration. The massacre was allowed to pass, not entirely unnoticed of course, but with little social and political ramifications. More interesting still, whilst the atrocity of October 1 was given some attention, another parallel shooting outside the University of Kansas on the same day, which left three people dead and two others seriously injured, received scant coverage by all accounts.

The above illustrative examples and references point to a serious disjunction between reactions to atrocities which are downgraded to violent incidents which involve perpetrators who are not deemed to have active links with external terror groups, and reactions to atrocities committed by those who are deemed to be a “threat” and ideologically motivated as in the case of Islamist insurgence.

Defining acts of terror or statistically recording them and distinguishing them from other public atrocities can be a problem. Given the nebulous nature of the generic label of “terror attacks”, and in order to make sense of the data from diverse sources of information, the US official definition of terrorism (with the addition of my own entry of religion) has been adopted here. Terrorism is “the unlawful use of force and violence against persons or property to intimidate or coerce a government, the civilian population, or any segment thereof, in furtherance of political or social [or religious] objectives”. With this in mind, and notwithstanding the limits of the available data, I provide an analysis of atrocities committed in the US in the last 44 years; their frequency, fatalities and injuries.

Terrorist acts are not the prerogative of our times. Acts of terror have a long history. In the US, 351 incidents of terror have been identified in the last 150 years to October 31, 2017, though the relevance of Islamist involvement is limited to the last 44 years. The tentative connection of terror to Islamist extremism dates back to 1973 with an attack on Israeli targets in New York and Oakland, California. Allowing for a few exceptions, of the 273 cases of terror identified in the 44-year period 1973 to October 2017, 232 (85 per cent) were committed in the main by American home-bred individuals and extremist right and left-wing groups. In contrast, and in the same period, terrorist incidents connected to radical Islamist terror groups numbered just 41, constituting 15 per cent of all atrocities. In a nutshell, the risk of encountering violence perpetrated by home-bred Americans and extremist groups is almost nearly six times more than encountering a similar act committed by individuals propagating an extreme and radical form of Islam.

The biggest loss of life and injuries occurred in the 9/11 attacks: 2,993 people died in those attacks and 8,900 others were injured. The multiple perpetrators of that crime were not US-based. These were 19 individuals who originated outside the US – 15 from Saudi Arabia, two from UAE, one from Egypt and another from Lebanon. The crime was externally orchestrated and executed.

By excluding the 9/11 fatalities and injuries from the overall figures, as not home-grown Islamic terror casualties, the picture changes dramatically. The number of deaths caused by Islamist activists from within the US drops to 353. This constitutes 21 per cent of all fatalities (1,692). Put differently, 79 per cent of all fatalities were caused by American others, not Islamists. If one excludes the 9/11 atrocity,  the probability of being killed by a terrorist attack by home-bred American individuals or white extremists is nearly four times more than being killed by indigenous Islamists or other extremist outsiders who share and advocate radical politics. Similarly, when injuries sustained from the 9/11 attacks are excluded, the number of all injuries is 8,476. Of these, 6,938 (82 per cent) were the result of home-bred Americans – not by politically or religiously motivated extremists like Islamist insurgents.

The US ought to worry far more about its own American citizens, its domestic American extremist groups and its ‘gun and God’ ideology. It should worry far less about external “evil” forces particularly from radical Islamist insurgence.

Terrorist acts, irrespective of how one chooses to define them, are real and real in their consequences. But at times of fear and intimidation it is easy to be selective and believe the story of some nasty boogeyman being the cause of all ills. In perpetuating the urban myth of a boogeyman, we tend to dramatise evil by taking a particular personal characteristic and blowing it out of proportion. We build on it a multitude of other negative characteristics to amplify the boogeyman into a more frightening and abominable creature. Those who are seen as a threat are ushered through a ceremonial passage of degradation and dehumanisation. It makes the social boundaries of the biblical struggle between “good” and “evil” appear real and convincing.

Despite all her efforts Zimbabwe’s Gucci Grace will fall

The loneliness of the long-distance cat catcher