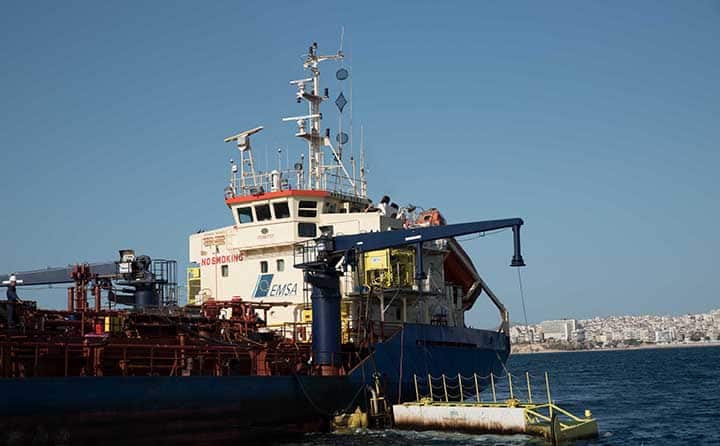 With Vasiliko already an oil storage facility and Cyprus looking ahead to a lot of hydro-carbon activity in its seas, one company is ready to act in case of an oil spill.

Vasiliko-based environmental protection company VSS EPE’s readiness was recently put to the test when it played a big part in cleaning up the oil spill in Greece which blackened popular beaches and bays in Athens’ Argo-Saronic gulf in September.

The Greek double-bottomed tanker Ayia Zoni sank while at anchorage near Piraeus on September 9. It had on board 2,500 tonnes of fuel oil and gas. Only two of the eleven crew were on board at the time, the captain and the chief engineer. Both were charged with negligence.

What had been thought a containable spill is now being described by officials as an ecological disaster after thick tar and oil pollution drifted toward residential areas.

Operations manager Giannis Spyrou from VSS EPE was the first of four people, along with necessary equipment, who were sent to help.

“I remember receiving a phone call from my director who informed me that I had approximately six hours to get ready to go to Athens, in order to meet the Greek team of our sister company EPE,” he told the Sunday Mail.

“I experienced a shock when I saw the oil spill I saw the minute I arrived at Salamina and I felt compelled to start working immediately to limit the damage.”

He met with the team and after a short briefing went to work though it was still dark. “We have very similar training so we each know exactly what everybody’s role is,” Spyrou explained.

The priority is to go to the wreck of the ship which had caused the spill to establish where the oil was. The next was to obtain a weather forecast to see where it might move.

The Cyprus team stayed for two weeks trying to contain the spill, working from the early morning until late at night until they and their Greek partners had it more or less under control. They worked onshore, where the oil was being removed with shovels from the beaches as well as off shore.

But most of the work was done with the help of the vessel Aktaia, a skimmer vessel which can remove oil from the surface of the sea and which can operate offshore, near a shore or in a port.

It opens its doors at the front and lets in the oil mixed with water. It has the ability to – mostly – separate the water from the oil and while the water goes back into the sea the oil is stored in the ship’s tank.

The Cyprus company has its own Aktaia which can store 100 cubic metres of oil. In addition, it owns another vessel, which can travel at 21 knots. In this way it can deploy antipollution equipment to platforms currently operating in the Cyprus sea within four hours. It also has twin unfolding sweeping arms for spill containment or dispersant spraying, an operational crane for loading and skimmer operations and a storage for waste.

Both are always on standby. VSS EPE employs people who live in the area so they can be ready quickly. Indeed, their contracts require that the equipment must be ready within 30 minutes. The company which was formed in 2015 through a joint venture with Greek environmental Protection Engineering (EPE) has contracts with the VTT Vasiliko oil storage terminal and the electricity authority of Cyprus.

It will have even more responsibilities when the oil and gas companies which were formerly based in Larnaca move to the area, something that is happening at the moment, and increased drilling in the seabed will take place.

The oil and gas companies have directives to protect the environment, but as yet there is a lack of a binding legislation, a gap that worries the company, which says it’s environmentally sensitive as well as a business.

As yet the company has not had to deal with a major spill, which Spyrou fears could be a disaster for our main income, tourism.

“With all the activities in the area it is not a question of if something happens but when, and we hope we will be able to contain such a spill. You cannot rule out human error but have to be sure to react as efficiently as possible.”

He cites the September incident in Greece where cleaning is expected to take a year and it will take many more years for the environment to recover.

Fantasist who talked big on Cyprus