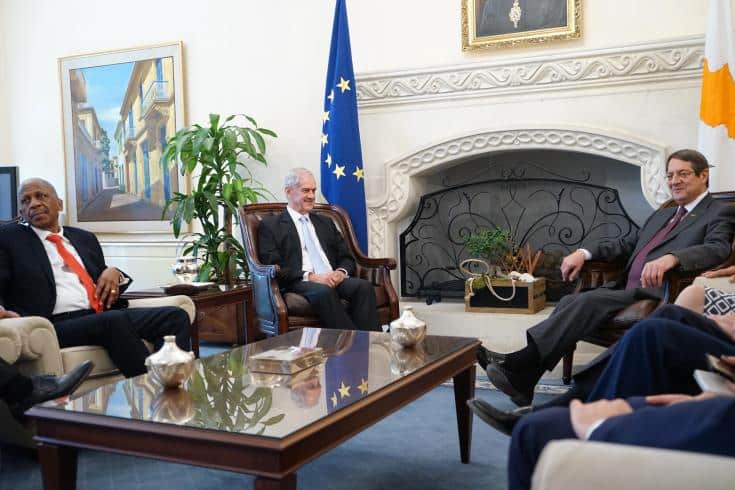 Mathews Phosa and Roelf Meyer meeting President Nicos Anastasiades during their latest visit on the island.

In complications, lie solutions, said two South African politicians who discussed recently during their visit on the island lessons learnt from the reconciliation process in South Africa and how these can be helpful in the case of Cyprus.

Former Minister of Defence and Constitutional Issues Roelf Meyer and former MP and candidate for the African National Congress presidency, Mathews Phosa, visited Cyprus last week at the invitation of ruling Disy to participate in a series of events on ‘Conflict solution procedures and best practices’.  During their stay they were received by President Nicos Anastasiades and House Speaker Demetris Syllouris.

Speaking to the Cyprus News Agency, Meyer firstly emphasised that there are many differences between the situation in Cyprus and South Africa, noting that ‘no two conflicts are the same. Each one is unique’.

“We are very cautious not to create the impression that we think that South Africa’s experience can be repeated in Cyprus. Definitely not. What we are saying is that there are certain basic principles that if followed, then the chances are better to find a settlement’, he said.

The first point he made was that there must be an inclusive approach. In South Africa, he said, they succeeded in creating space for everybody to participate in the negotiations and contribute towards the solution.

The second one is that ‘we succeeded in building trust across the divide. We come from opposing sides in the South African conflict’ he said referring to his colleague, ‘and we were like enemies when we started. There was a complete distrust across the divide and through the negotiations we succeeded in building trust in each other to the extent that that trust helped us to overcome the differences and find a solution. And the proof of that is that we are here together as friends and brothers in peace. And that is a very important message from the South African story’.

The last point he made is that they took ownership of their problem, its resolution and their own destiny.

‘We took responsibility ourselves. We did not leave it to others. We were not trying to find mediators or facilitators to come from outside. We were directly negotiating with each other. When we had breakdowns we had to look each other in the eyes and say, so, what now? We did not depend on outsiders. Of course, we were fortunate to have leaders like Mandela and de Klerk. But we do not overemphasize that because other situations may not be that fortunate’, he pointed out.

Referring to Cyprus, he said that he has visited the island on many occasions in the past, and pointed out that ‘I think there has been a lot of progress in the past two years in particular and we have to applaud the leaders on both sides for the progress made’.

‘There is obviously a stalemate at the moment, an impasse, and that has to be addressed’ he continued, saying that they had experienced many stalemates in their experience but they focused on their vision for the future.

Mathews Phosa stressed the need for a sincere dialogue in order to overcome problems.

‘You have to talk to each other, openly, honestly and understand the other person’s fears and concerns’ he said, noting that big compromises must be made and one must be ready for a ‘give and take’.

Phosa also said that certain sunset clauses may be necessary, ‘certain arrangements which may not be permanent but at the beginning are necessary to build confidence. So those things need to be looked at’.

He emphasized the need to have a feeling of security and to have a strong judiciary.

‘Leaders must see solutions in the complications. Like I say, be prepared to give and take. There is a lot of pain around here I think which is historical. But people who want peace live beyond pain, they live beyond the past, they assume a moral high ground and move on. For the young generation there is no interest to stick to the past. They want to move on. And the people of Cyprus must move on’ he concluded.

The Republic of Cyprus, a full EU member state, has been divided by Turkish troops since 1974. UN led peace talks have yet to yield any concrete result leading to a political settlement.

Trump says N.Korea’s Kim insulted him by calling him ‘old’