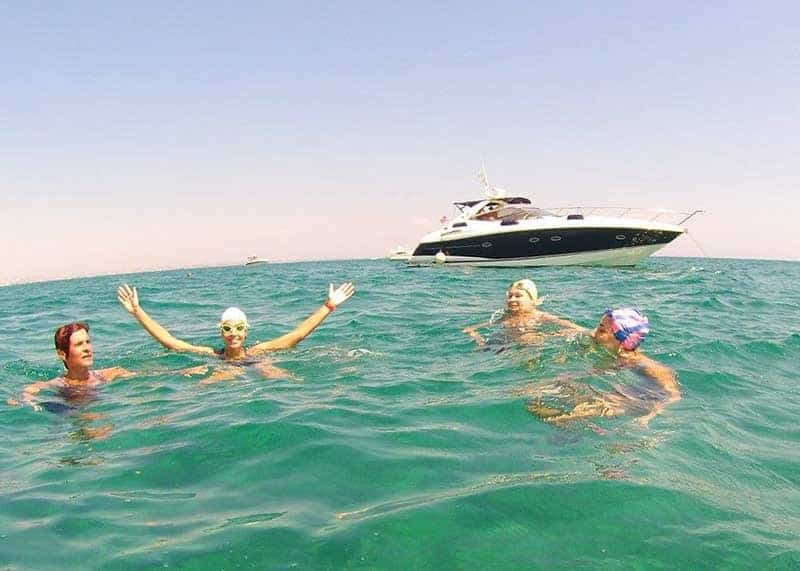 Women – and this is putting it mildly – have not always been encouraged to participate in sport. Even today, female athletes are fighting the gender stereotype: while 40 per cent of sporting participants are women, only six to eight per cent of total media sports coverage is devoted to their athletics, according to the Women’s Sports Foundation. A mere 0.4 per cent of the total commercial investment in sport goes into women’s sport, and just half of the governing bodies in sport currently meet the recommended target of having 25 per cent female board members. Perhaps, most sadly, two million more men than women take part in sport at least once per week. It’s something that Natalie Christopher and Nazo Canitez are looking to change. Founders of the campaign Cyprus Girls Can, the two have spent the last year organising everything from school visits to open days, lectures to classes in an effort to encourage more women to take up sport.

These two hard-working sportswomen (Natalie is a runner and triathlete, Nazo a climber and yoga enthusiast) launched Cyprus Girls Can just a few months ago, providing “a network or platform to bring women together and provide opportunities in sport, while raising the profile of local sportswomen. It’s a campaign which aims to get women and girls of all ages and abilities from across Cyprus involved in sport,” Natalie explains. “Simultaneously, we’re spreading the message throughout the community that it’s okay for women to be doing sport and spending time on this; normalising the idea of women taking part in sport in Cyprus.”
As part of the campaign, both founding members (Nazo is currently in America finishing her studies, but still takes part wherever possible) have been speaking to schools because, Natalie reveals, gender stereotyping in sport can begin at a very young age. “We visit schools right across the island, and have seen everything from bullying to social pressure to body image affecting young girls in their quest to participate in sporting activities. One of the first things we do is ask the children to name a female sporting role model: most can’t. They know plenty of male footballers, NBA players, and athletic stars, but when I tell them about my personal sporting hero, Jennifer Ennis Hill, they’ve never heard of her.”

Draw the net a little closer, Natalie suggests, and not even the adult population is aware of our local female sportswomen; women, she adds, who are dedicated, inspirational, and flying the flag for female sportswomen both home and abroad. “As part of the campaign, we interviewed Carmen Macheriotou, the only semi-professional female triathlete in Cyprus who competes internationally. We’ve also highlighted the achievements of Olympic cyclist Andri Christoforou, and our November ‘Athlete of the Month’ is Ilia Kleanthous, a 14-year-old girl who is the first person – male or female – from Cyprus or Greece to qualify for the Reebok Crossfit Games.”

Along with their awareness-raising events and interviews, the duo also organise any number of events aimed at promoting sports to women. “I think the information in Cyprus on where you can actually practise or try a sport is not very well collated,” Natalie proposes. Herself a British-born Cypriot who spent much of her life in the UK – where she was an ardent member of any number of sporting clubs and athletics societies – Natalie was shocked when she returned to Cyprus in 2011 to discover the lack of information on sports. “Finding a club for running, which is my particular passion, was a real challenge. If you don’t know anyone in your near circle who participates in a sport it’s very difficult to find what you need; your nearest badminton court or a group of like-minded climbers, for example.” Eventually, Natalie found the Cyprus Trail Runners, and established a network. “But the information is not well-disseminated, especially with regards to women!”

On top of that, women are often made to feel guilty for time spent away from the home, and often objectified for their passion, Natalie continues. “It can be very isolating for women to run or cycle alone. Before I discovered the Trail Runners, I’d run by myself. This is probably one of the few countries in the world where, as a woman, you’re completely safe running alone – but what kind of European society still sees men honking at a woman just because she’s out there running in shorts?” Similarly, a recent all-female bike ride saw passersby “looking shocked to see so many women cycling around. It seemed to confuse people that so many women could participate in and enjoy a sport.”

While women make up 50 per cent of the population, female sporting participation levels are still low, Natalie adds. “I’m not saying that women don’t do any sport in Cyprus, but the statistics don’t lie. Women are very underrepresented in sports here, and at the same time, almost nobody knows about our amazing female athletes. Via our activities, we’re hoping to change this for the better. In fact, just last week, after a talk to a group of children at a school in Kyrenia, one girl came up and hugged me, thanking me for speaking to them about such an important issue. It’s incidents like that which make this worthwhile.”

While Cyprus Girls Can is still in its infancy, the campaign has already been shortlisted for European funding under the #beinclusive project. “Just being shortlisted is incredibly motivating,” Natalie acknowledges, “because it means the EU supports what we’re doing and is in agreement with our aims and plans.” At the moment, the group receives no funding whatsoever, so transportation costs for the participants, rental of space for lectures, and a myriad of related sundries are being paid for out of the organisers’ own pockets. “If anyone would like to sponsor our campaign, we’d be immensely grateful,” Natalie adds. “Sport is such an advantage to everyone: it has incredible physical, mental and social benefits, and teaches skills which are transferable to so many other areas of life. But, for women especially, you need a support system to progress: friends, family and clubs who believe in you and help you on your way. And that’s what we’re doing with Cyprus Girls Can.”

For more information on Cyprus Girls Can, call 97 681067, [email protected], visit the Facebook page ‘Cyprus Girls Can’, or www.cyprusgirlscan.com/ December’s activities include a basketball opening day with the Peace Players International, a rock climbing open day in the Pentadaktylos Range; a trail running event; a mixed martial arts class, a dance open day, and a yoga event