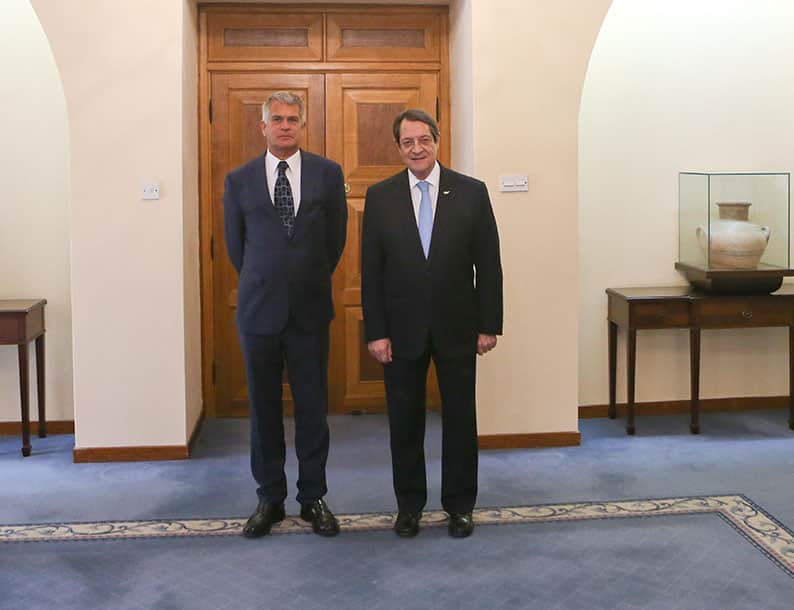 The government is striving to make Cyprus a world-class destination for business and investment, President Nicos Anastasiades said on Monday, as he received on Monday the credentials of the Ambassador of the Grand Duchy of Luxembourg Cyprus, Paul Steinmetz,

Presenting his credentials, Steinmetz said both countries are well aware of the importance of connectivity and both specialize in developing connectivity in financial services.

“We need to look into possibilities and especially develop flight connectivity between our countries so more tourists may visit,” the ambassador said.

He congratulated Anastasiades for “steering your country through the troubled years after 2013. The economy of Cyprus is doing well and the growth forecast was recently revised upwards.”

On the Cyprus issue, he said Luxembourg greatly regrets that the problem remains unresolved despite the best efforts of all parties over many decades.

Luxembourg, he stressed, “is fully in support of the efforts of your country to reach a comprehensive settlement aiming at the reunification of the island, in accordance with the relevant UNSC resolutions.”

Replying, Anastasiades reiterated Cyprus’ deep appreciation for Luxemburg’s strong support to efforts to end the unacceptable status quo and reunite the country and its people.

He underlined once again “our unwavering determination to end the division of the island and our commitment to exert every effort to reach a comprehensive settlement.”

On relations between the two countries, the president said that he is confident that the two countries can continue to constructively work together so as to intensify their close cooperation even further in many fields, including new ones, from economy to innovation and entrepreneurship, and from tourism to culture and education.

Cyprus continues to be a highly competitive centre for international businesses, offering a platform for operations and preferential access to markets like Europe, Middle East, North Africa and Asia, he said.

Anastasiades added that the government was now focusing on attracting investors in the productive sectors of the economy and efforts have yielded results.

Foreign Direct Investment has seen a 9.1 per cent rise in 2016, compared to the previous year, which was the second largest increase at EU level, the president said.

“This is my Government’s most important priority, following the restoration of the state’s and the financial system’s credibility,” he said. “The majority of economic sectors in Cyprus present growth opportunities: energy, tourism, shipping, real estate, education, health, transport, research and innovation.”

Encouraging Cyprus girls to believe they can