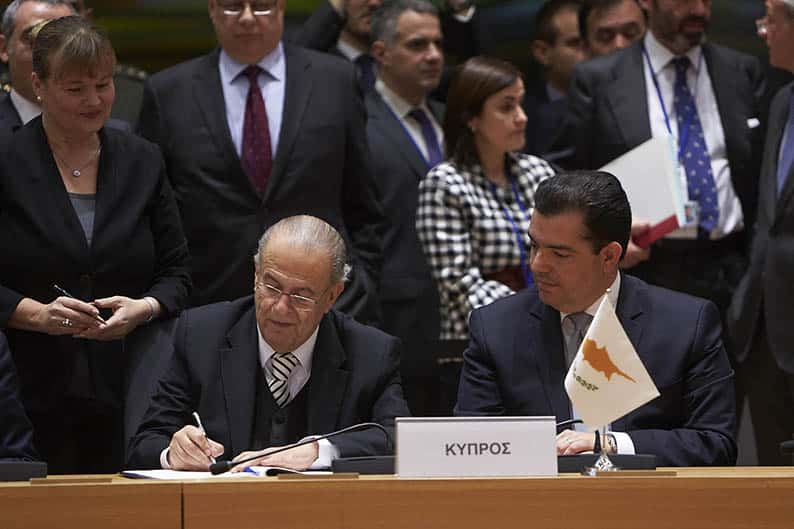 Cyprus was one of 23 EU member states which signed the EU defence pact Pesco on Monday in Brussels.

“For the first time, a shield has been created which protects the Republic of Cyprus as a European border from any outside interventions,” said President Nicos Anastasiades, welcoming the development.

“It is not an aggressive but defensive agreement, and this has a great deal of importance, and therefore Turkey’s key argument that the presence of the Turkish army would contribute to the protection of the Republic of Cyprus from outside interventions is also neutralised.”

The pact includes all EU governments except Britain, which is leaving the bloc, Denmark, which has opted out of defence matters, Ireland, Portugal and Malta.

According to a statement by the European Commission which welcomed the move, Pesco is a framework and process between EU members “who are capable and willing to do so”.

It will allow member states to jointly develop defence capabilities, invest in joint projects and enhance the operational readiness and contribution of their armed forces. The European Council is expected to adopt a formal decision to establish Pesco by the end of the year with the first plans being identified in parallel.

The European Defence Fund, launched by the commission in June 2017, will strengthen cooperation projects in the field of defence research, prototype development and capacity-building. Monday’s joint communication marks a significant step towards the creation of a fully-fledged European defence union by 2025 as President Jean-Claude Juncker described in his speech on the state of the union on September 13.

Cyprus signed the Pesco pact after cabinet approved a proposal for Cyprus’ participation in it last Wednesday, two days after President Nicos Anastasiades met with French President Emmanuel Macron in Paris. France and Germany are leading the way in pushing to increase such cooperation across the bloc.