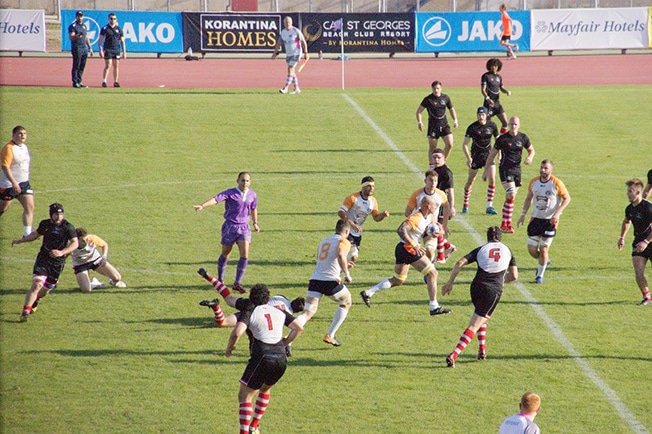 The Cyprus national rugby side was in great form over the weekend (Photo: Viki Michaelides)

The Cyprus national rugby side beat Austria 42-5 at the Paphiacos stadium over the weekend in Rugby Europe Conference 2 South.

The players had barely warmed up when Marcus Holden, the mercurial half-back and a great favourite with the crowd,pierced the opposing defence and opened the scoring with five points under the posts, which he converted, giving the home side a lead of seven points after seven minutes.

The game continued in this vein, with the Moufflons commanding the set pieces, rarely losing possession, and defending in a manner that denied the opposition any chances.

It was one of the best displays by the home team in recent years, leading to two tries by the captain, Frixos – an outstanding young forward.

The Moufflon supporters were treated to an outstanding performance from their team, with sterling efforts from the multi-capped ‘Gorgeous’ George Agathokleous, supported by Fidias Efthymiou and Holden.

The half finished with Cyprus leading 21-0.

The game continued in the same mode after the break with the Moufflons dominating in every aspect. It is a sad feature of some one-sided games that discipline collapses, giving the officials many problems. However, this match was an exemple of fair play, causing little trouble for Mr. Cabra, the Israeli referee, and his assistants.

The second half gave opportunities to Chris Georgiou and the scrum-half Theo Gavrielidis to add to the score, taking the Moufflon total to 35, after Marcus Holden converted.

Efthymiou contributed to a well-constructed try by Christopher, which was converted, and gave the home side an unbeatable lead of 42.
But, with a few minutes to the final whistle, the Austrians, who never gave up the struggle, were rewarded with a try giving them a well-deserved five points.

Theo Lenos, team manager, stated: “This was a well-deserved result that gave our supporters and the sponsors: Twenty-4-Seven and ShadePorts, the incentive they need to stay with us.

“We have a good record against our opponents in this division, and should finish the season near the top. If anyone missed the game they can always watch it on the Rugby Europe website.

“The media must let the nation know how we have performed against the best in Europe, with little financial support, yet achieved so much.”

The Moufflons are next in action on November 25, with an away match against Slovakia.

Encouraging Cyprus girls to believe they can