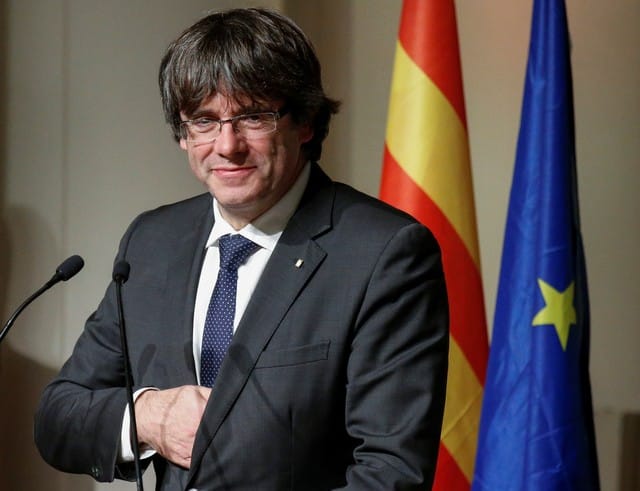 Catalonia’s deposed president said he might consider a solution to Spain’s political crisis that did not involve the region’s secession, appearing to soften the staunchly pro-independence stance that cost him his leadership last month.

In an interview with Belgian daily Le Soir, Carles Puigdemont was asked if a non-secessionist option was on the table to resolve a crisis triggered when Spain took over control of the region after its parliament declared independence on Oct 27.

“I’m ready, and have always been ready, to accept the reality of another relationship with Spain … It (another solution) is still possible,” Puigdemont said.

“I have, being pro-independence all my life, worked for 30 years to have another way of Catalonia being anchored to Spain,” he added, giving no details of what form such a relationship could take.

He posted a link to the interview, which was published on Monday, on his Twitter feed.

The former president is in self-imposed exile in Belgium after running an independence campaign that prompted authorities in Madrid to fire his cabinet, dissolve the regional parliament and call new elections for December.

Puigdemont, who had previously insisted the independence declaration should form the basis of any political negotiations with Prime Minister Mariano Rajoy, is under conditional release after an international arrest warrant was served against him.

He and four other former members of the Catalan government with him in Belgium face charges of rebellion and sedition.

Rajoy has said he was open to talks with Catalan leaders on resolving Spain’s worst political crisis since its return to democracy four decades ago, but only within a legal framework and after the independence drive was dropped as a condition.

In an interview with German newspaper Handelsblatt published on Monday, Rajoy said the position of the former Catalan leaders focused on the independence vote and gave little room beyond that for debate.

“Many blame me for not seeking political solutions. But I’ve been in politics for a long time and … there was no alternative,” Rajoy said, adding that the Catalan crisis was the largest problem he had had to face as prime minister.

He said he had tried to reach a compromise with the regional government, but it was impossible. “The government of Catalonia had only one goal – the independence referendum,” he said.

The Spanish government has called regional elections for Dec 21, and Puigdemont’s PDeCAT has failed to agree on a united ticket with other secessionist party, the ERC, denting the pro-independence camp’s hopes of uniting behind the secessionist cause.

The head of the ERC and former deputy to Puigdemont, Oriol Junqueras, will campaign for his party from a prison cell after being detained with other cabinet members who remained in Spain and pending trial on sedition and rebellion charges.

According to an opinion poll released last week, independence supporters would win the election if they ran on a joint ticket, though probably short of a parliamentary majority.

Cahill fit and raring to go against Honduras