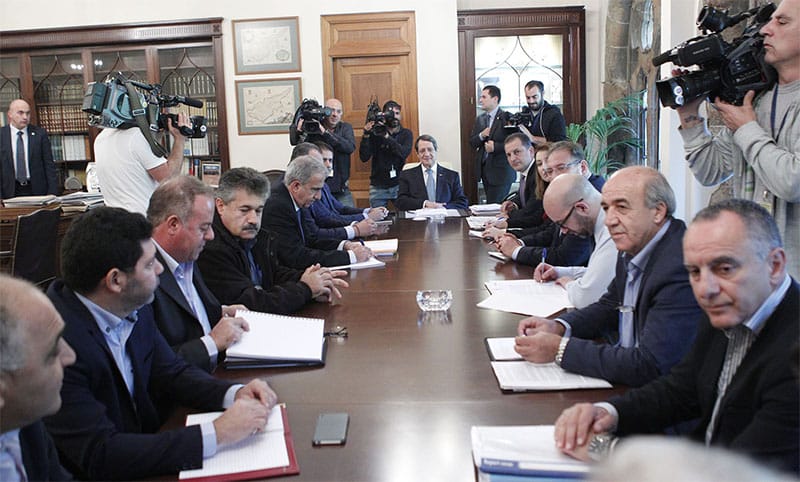 An impending strike by the state power company EAC was averted on Tuesday after a compromise was hammered out during a meeting between the facility’s unions and President Nicos Anastasiades.

“A constructive and, at times, lively discussion was held, and we managed to come to an arrangement where we shall work in common with the unions and the EAC’s board to improve the guidelines document prepared by the energy regulator and the ministry relating to the autonomy of the transmission system operator.”

According to Lakkotrypis, the unions received assurances from the government that the latter “will work toward strengthening the EAC as a vertically-integrated business, owned by the state.”

This would be done by including the EAC in infrastructures that generate electricity from natural gas, as well as the utility’s participation in renewable energy sources projects.

“The unions’ main demand was not to thwart the opening up of the electricity market, but rather that the EAC should remain a competitive concern, a strong business that constantly improves, something which is consistent with government policy,” he added.

The EAC syndicates, too, put a positive spin on the outcome.

Unions rep Andreas Panorkos read from the meeting that “we ensured that the EAC will continue to operate as a single nationalised enterprise.

“We are moving away from any legal unbundling of the EAC, which is to retain its assets, such as the transmissions lines and electrical substations.”

But the political speak couched the fact the two sides failed to resolve their key dispute, which is that the government wants to make the Transmission System Operator – which monitors transmission and production – a fully autonomous agency.

The unions see this as the first step in the EAC’s unravelling.

Currently the TSO is completely reliant on seconded staff from the EAC.

The government and the energy regulator argue that this needs to change as seconded EAC technicians cannot possibly be given access to the proprietary data of independent power producers once the market opens up – something that is envisioned for mid-2019.

During Tuesday’s meeting, the government held fast to its stated intent of gradually rendering the TSO autonomous.

Though the syndicates did not get what they wanted, they received a pledge from the government that the EAC’s assets – such as its energy transmission network – will not be transferred to the TSO.

What the two sides essentially agreed to is a reprieve: that a document being drafted by the energy regulator outlining the operation of the TSO in a liberalised electricity market is to be revisited with input from the stakeholders.

The government meanwhile threw the unions another bone, satisfying their demand to unfreeze a number of positions in the semi-state organisation.

Currently, the EAC is a vertically integrated organisation in that it owns the entire supply chain. The unions want to keep it that way.

But recently the government rocked the boat when it submitted to parliament a bill aiming to make the TSO fully independent.

The EAC argues that the government, if it wanted, could ask the European Commission to grant Cyprus a derogation so that it is exempt from the requirement to proceed with ownership unbundling of the power company.

When exactly will Britain leave the EU? UK parliament debates

Most millennials seen worse off than parents despite aptitude: study