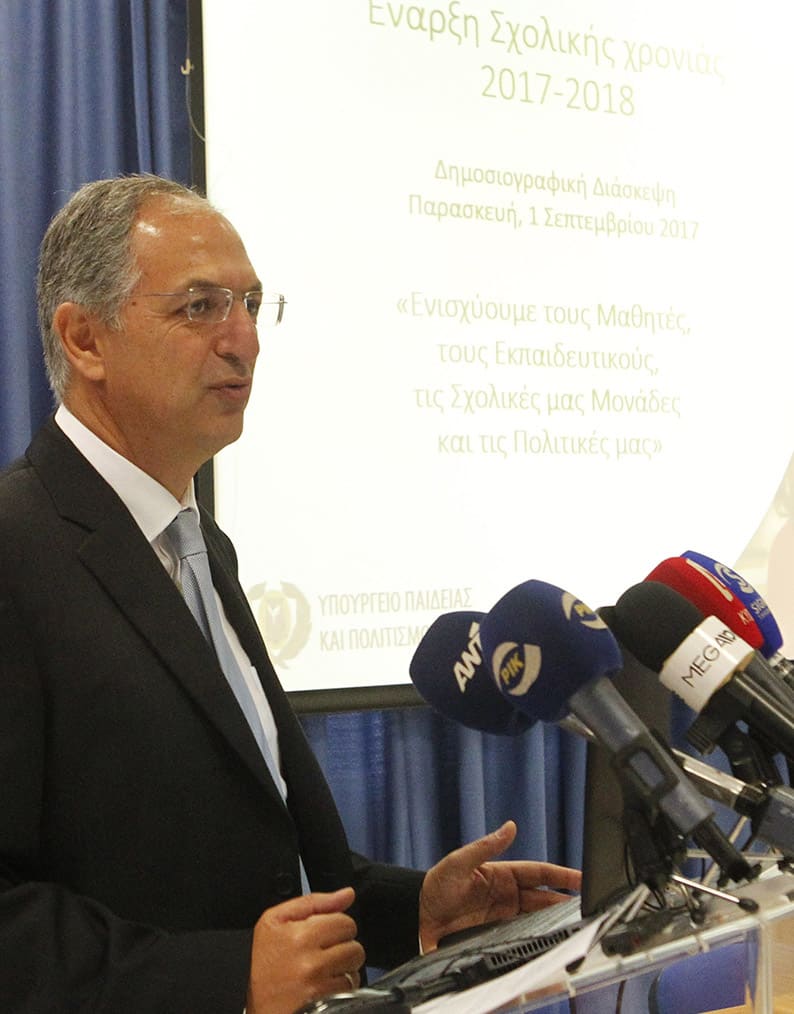 The premature online posting last week of the material of five exams for candidates for state teaching posts was a mistake due to impulsive actions by one official and omissions of others, Education Minister Costas Kadis said on Tuesday.

The minister – who received the findings of an internal administrative probe into the blunder that led last week to the cancellation of five exams – said that, based on the investigation, those involved “may have committed disciplinary offences”.

The posting online of the material of the five exams, Kadis said, appears to have been an error “due to a mistaken and impulsive action by an official and to actions and or omissions of other officials”.

He said that he would propose to cabinet on Wednesday appointing an independent investigator to begin the disciplinary investigation into those involved.

Kadis said the findings will be forwarded within the day to the attorney-general asking him to weigh in on whether any issues arise concerning the validity and reliability of the examinations “to ensure that there are no shades in the process that has been followed”.

“It was an unacceptable mistake […]. Just because it was due to impulsive actions, it does not mean it was not serious, unacceptable, even tragic I would say since it caused all this inconvenience,” Kadis said.

Kadis stressed that despite the blunder, the rest of the exams were carried out smoothly and that his ministry is determined to see this reform through. The exams that were cancelled were re-scheduled for this Friday and Saturday. The cancellation affected 941 candidates, many of whom had travelled from abroad. The cabinet approved a €40,000 budget to cover expenses for exam-takers who will travel from abroad to take the new exams.

He said his ministry has also investigated two alleged leaks of the material of the speech therapy exams – which were sent last week prior to the exams to a media outlet and a party leader. The material sent, Kadis said, was misleading as it was completely different from the exam paper.

“It is clear that some want to undermine the process, some don’t want this important innovation and reform that our society has been waiting for for decades to be implemented,” Kadis said.

He said that these people are those who “have been ensconcing themselves all these years… and were waiting their turn to enter public education and not with their qualifications, skills, knowledge and experience”.

The new appointments system will see school teachers appointed after they pass exams rather than the old system that was a waiting list. From September 2018 until August 31, 2027, 50 per cent of appointments will be made from the current waiting lists and 50 per cent from the pool created under the new system. After that all teachers will be appointed based on exam results and qualifications.

On reports on irregularities concerning staff of his ministry, Kadis said that a lot has been said about this procedure and that some of has already been proven wrong, while for other reports, they are waiting for the opinion of the auditor-general.

He added that he has already ordered disciplinary probes into some of his ministry staff who had participated in education programmes of a private higher education institution without first obtaining permission but that this has nothing to do with the exams.

This case concerns reports made by main opposition Akel that also asked the auditor-general to investigate a possible conflict of interest over the exams. The party reported that eight senior education ministry officials had been teaching preparatory courses for the exams at a private higher education institute. The party also said that two University of Cyprus lecturers who sat on the committee of experts tasked with overseeing and organising the teacher exams had also worked at the same institute offering preparatory courses to exam candidates.

These claims have angered both the Rector of the UCy, Constantinos Christofides and Theodore Panayotou, the director of the private institute in question, the Cyprus International Institute of Management (CIIM). Both call these claims as lies and misleading.

Panayotou said that the preparatory courses were taught by other people than those the reports say.
The UCy said it ordered a probe against the two lecturers not in relation with the exams but because they had not asked permission to also work for the CIIM. Christofides clarified that the two lecturers had taught courses of the CIIM’s graduate programme in educational leadership management and that neither of them had anything to do with the exam preparatory courses.

British Council University Fair: all you need to know about studying in the UK

Fears mount over killer superbugs, but simple steps on farms can help